According to users reports, it appears that the recently released MIUI 12 system is spotting apps that are going haywire. Well, the problem is not with the MIUI 12 itself but installed apps seem to be behaving crazily. According to CCTV News, there are multiple reports of strange behaviors of MIUI 12 apps. The misbehaviors of these apps include self-launching and unauthorized accessing, and reading of phone information. 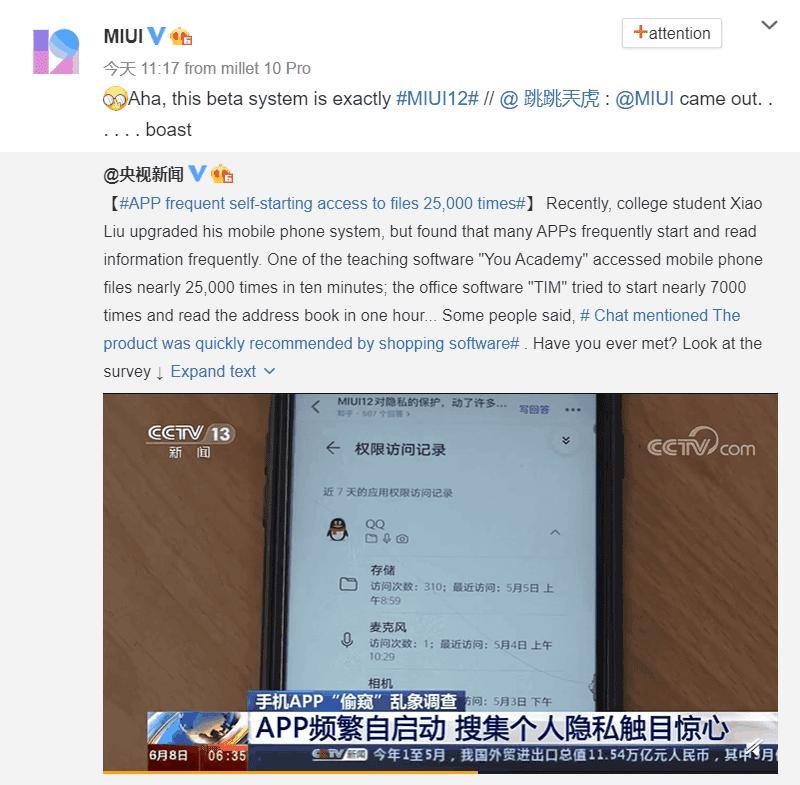 Today, some netizens reported that many of the apps installed on their mobile phones frequently. These apps do not only self-install, they also start automatically. According to reports, a mobile teaching app “You Academy” reads nearly 25,000 mobile phone photos and files in about than ten minutes. Also, Tencent “TIM” tries to start nearly seven thousand times within one hour and keeps trying to read the address book. Furthermore, other popular Chinese apps like “Pin Duoduo”, “Meitu Xiuxiu”, “National K Song”, “Honor of the King”, and “Sina Weibo” also shows funny behaviors.

The frequent launch of apps can increase the number of visits and traffic of the app. This means that the app will record a false “Daily Active Users” figure. Of course, we know that this figure is one of the reference indicators for apps to obtain financing and advertising. Due to the emergence of system-level monitoring app background permission functions such as MIUI 12 flares, issues such as these are constantly public. This makes users aware of what some apps are doing in the background. Many users are no longer confident in mobile systems. They worry about the privacy and permission issues of these apps.

The problem of excessive collection of user information by mobile apps is a very big issue. Experts say that network operators must follow the “least enough principle” to collect personal information. The method and scope should be clarified, and it must not be collected except for security purposes. Lu Feng, deputy director of CCID Research Institute of the Ministry of Industry and Information Technology has a solution to the problem. For him, it is necessary to strengthen the monitoring of the permissions and privacy issues of apps. Once the app defaults by trying to collect more than necessary data, such apps should be flagged. Furthermore, he believes that an increase in the user’s awareness of self-privacy protection is very vital.

The defaulting apps were only spotted because MIUI 12 comes with “Flares” which essentially keeps a tab on all the permissions given to different apps. This shows that the ratings of many of these apps are false.

Next Android: Google Play Store is the home of thousands of malicious apps