Yesterday Xiaomi officially announced that the Xiaomi Mi Band 5 will be released on June 11. Today, the company officially released a rendering of the new bracelet.

Judging from the official renderings, the Xiaomi Mi Band 5 supports pressure monitoring, as well as sports modes such as rowing machine, yoga, and rope skipping. Of course, mobile payment is also essential. 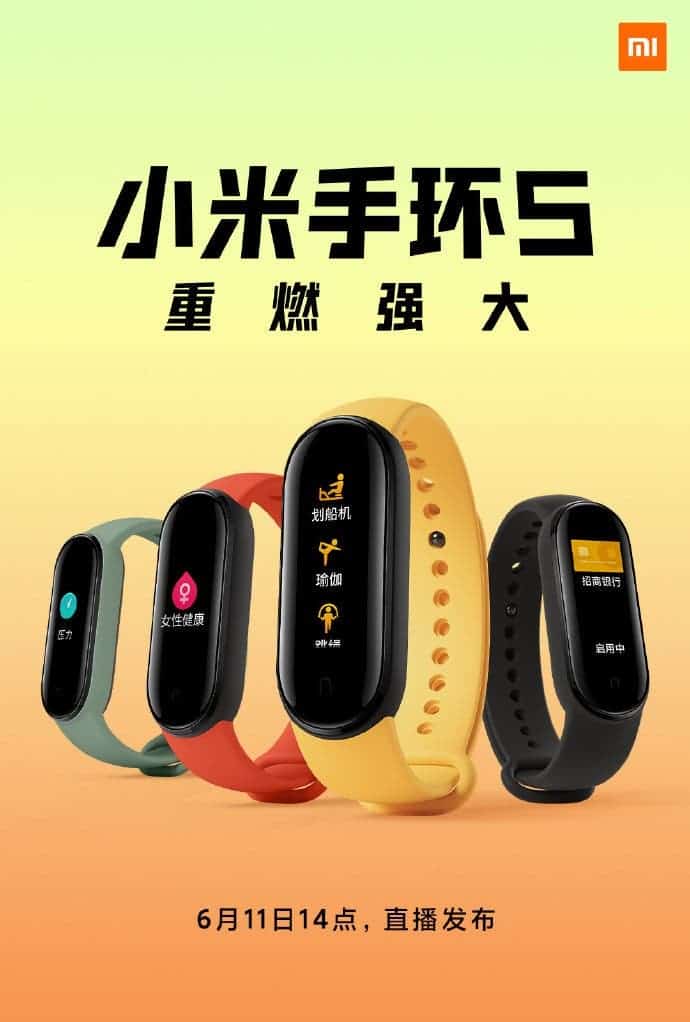 Previously, we have heard too much about this smartband. But most of the leaks referred to its appearance. As you know, the company has added a button on the screen. And this caused a lot of stir around. We mean people think the screen area of smartbands is too small. So adding an additional button on it will reduce the screen ratio and the operational area. In some sense, those users are true. But on the other hand, there are not many things you can do with the smartband. So if adding a button on the screen will make the interaction easier, it’s a quite acceptable approach.

In terms of key features, the Xiaomi Mi Band 5 will get a larger display of 1.2 inches. Interestingly enough, the live photos reveal a new charger. Apparently, the new Mi Band 5 will feature a “plug-in” type of design. Despite this change, the design seems to remain intact, besides a new flatter finish. Of course, this may be a matter of perspective, but it seems slightly flatter than its predecessor. The Mi Band 4 has more pronounced curves.

But the biggest change is that the company removed the hole on the screen. Moreover, the international version will also add an NFC function.

Apart from this, previously, we learned about a new feature added to the Xiaomi Mi Band 5. It will support photo capture function via smartphone. And while in many smartwatches or even smartbands, this feature is now new, the Xiaomi Mi Band series gets it for the first time. In addition, there will be 5 new sports modes: yoga, elliptical machine, rowing machine, skipping rope, and indoor bicycle. This also increases the total number of sports modes to 11.

Previous The camera technology under the screen is ready: first models soon