Samsung has been investing in the smartwatch segment for quite some years nows. In counterpart to other companies using Qualcomm’s Snapdragon Wear Platform and Google’s WearOS, the Korean firm has been sticking with its in-house Exynos chipsets and Tizen OS for wearables. The company keeps tracing a path that is out of the curve, and for that reason, it achieved great success trailing a path similar to Apple and its Apple Watch offerings. Now, the company is gearing up to unveil a new smartwatch to fill the 2020 gap. While previous rumors pointed to the arrival of a new Galaxy Watch 2, a new certification filing suggests that the company’s next smartwatch will carry the Galaxy Watch 3 moniker.

Samsung is skipping the Galaxy Watch 2, but the reasons behind this decision are uncertain. The company’s next smartwatch has already been certified by a handful of regulatory agencies. The list includes the FCC, Korea’s NRRA, and Thailand’s NBTC. For that reason, we believe that the device is nearing the shores and an official launch is just a matter of time. According to the latest certification document, the watch will carry Galaxy Watch 3 moniker and the model name is SM-R855F. The wearable has a 41mm size, however, the company will also offer other sizes like a 45mm version. Moreover, Watch 3 will come with cellular connectivity WCDMA, and LTE. Not a big surprise here, since the first Galaxy Watch had an LTE model. The company’s support page has also gone live in Korea for model names SM-R840 and SM-R850. These probably are two distinct versions of the Watch 3. 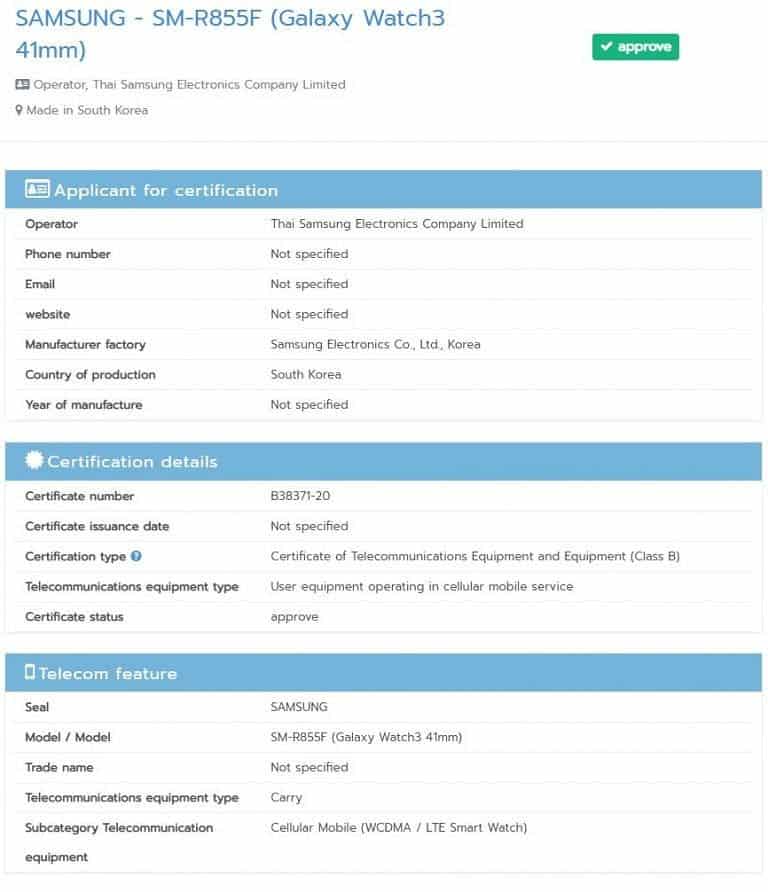 Why Samsung is killing the Galaxy Watch 2?

Samsung already has a pretty consolidated strategy of skipping numbers for the sake of marketing. Do you remember the ill-fated Galaxy Note 7? It came to succeed the Galaxy Note 5. However, the company decided to bring the Note series to the same number as the Galaxy S series. It didn’t bring any extra luck for Note 7, unfortunately.