Today the “Flip!” showed an in-depth conversation with Wang Yonggang, general manager of Huawei P series products. He not only talked about the entire P40 series and pointed out the key differences between Huawei P40/Pro/Pro+, but also spoiled some information about the upcoming Huawei P50 smartphones. 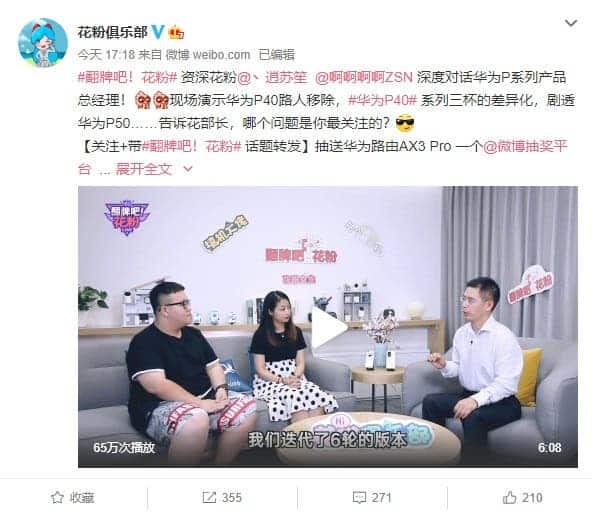 Wang Yonggang said that the Huawei P series is the flagship series of Huawei smartphones. This line always takes smart photography and technological aesthetics as the two basic genes of the series. In terms of design, starting from the Huawei P6, insisting on beauty is an attitude. We saw this on the very popular aurora color of the P20, the mirror sky effect of the P30, and the P40 series was launched with the nano-microcrystalline ceramic process.

The material of the Huawei P40 brings three obvious benefits:

Also, Huawei’s Wang Yonggang introduced that in terms of smart photography, the Huawei P9 began to cooperate with Leica and launched the Leica-enabled dual-camera. Later, the P10 and P20 came with an AI smart photography; the P30 supports super night scenes and telephoto; the P40 series has gone even further – in addition to the largest sensor on the smartphones, it also supports 10x optical zoom, 20x hybrid zoom, and 100x digital zoom.

Wang Yonggang said that the three smartphones fully inherited the P series’ consistent smart photography and technological features. All three phones use a 1/1.28-inch main camera outsole, bringing high-definition shooting effects and eight-core speed focusing. All three models use flexible screens – the P40 uses a flat screen, while the P40 Pro and the P40 Pro+ use quad-sided curved screens. The three products have many of the same characteristics and many different elements. So they can satisfy all kinds of consumers.

In terms of sales, the Huawei P40 has a great increase compared to the previous P series smartphones.

What about the Huawei P50?

Regarding the Huawei P50 smartphone, Wang Yonggang said that each generation of the P series was released in the spring. And it took at least 18 months of research and development. So since last year, Huawei has prepared for the next year’s P series products. So far, this work has been completed. The next generation of products in the future must be very innovative and competitive.