Chinese manufacturing giant, Xiaomi, is quite innovative and has been releasing good products over the past few years. There has been consistent development in the smartphone battery segment. Now, 3000 mAh is no longer decent. For many users, a decent battery should be at least 4000 mAh and above. Likewise, the fast charging capacity and charger head rating are also increasing. In the past, 18W charging seems sufficient. However, we now have smartphones that support up to 65W fast charging. A hands-on video of a Xiaomi 120W fast charger hit the web today.

The charger is relatively large and we doubt the authenticity of this product. The label on the charger is blur and there seems to be some ghosting. According to screenshots, purported Xiaomi 120W fast charger supports 20V/6A MAX, and also supports 20V/5A MAX, 11V/6A MAX, etc.

Although there is no official confirmation for this product, this video is not the only source of information on the Xiaomi 120W fast charger. According to popular Weibo leakster, Digital Chat Station, the charger supports a maximum output of 120W. In the comment section, he also insinuated that the phone of this charger will support up to 100W fact charging. 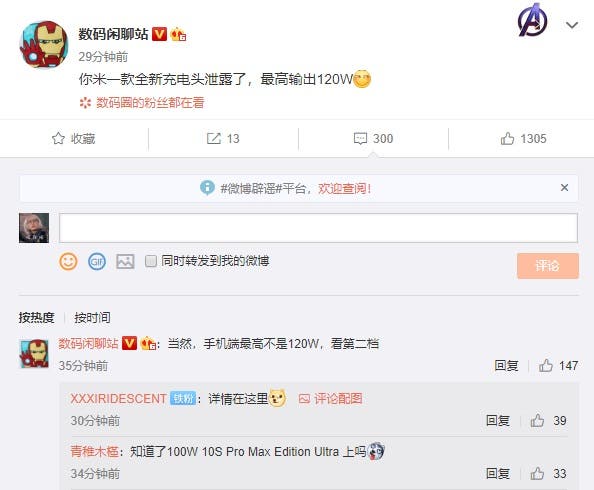 A quick charge that goes between 30W and 50W is more than enough for most users, especially when we take a look at the battery capacities of smartphones. Having 100W available sounds great when it comes to charging a 70,000 or 100,000 mAh battery, but it is not that interesting when faced with 4,000 or 5,000 mAh batteries. A few months ago, Xiaomi confirmed that its 100 W charging system is not yet ready. However, the company explained that the charging speed greatly degrades the battery cell it is charging. According to Xiaomi, this type of charge degrades the battery capacity by up to 20%. So to have 4,000 mAh you must have a 5,000 mAh cell. In the case of having a 4,000 mAh cell, the figure will go down to 3,200 mAh if you use this type of charging. Of course, Xiaomi will have to overcome this shortcoming before releasing the feature.

Next HTC Desire 20 Pro gets more certifications - to arrive soon