Samsung’s Galaxy Fold 2 is slowly starting to emerge from the shadows as we inch closer to its alleged launch.  A fresh report out of South Korea states that the new flexible phone will feature a bigger internal display and up to 120Hz refresh rate screen confirming many rumours.

South Korean ET news has reported that the new Galaxy Fold 2 will feature a massive 7.7-inch internal display. This is a slight bump of 0.4-inches compared to the OG Fold. However, the highlight here is the external display which is said to be a whopping 6.23-inches in size.

Full-Screen Experience on both sides

The report says the bigger display will fold in-wards using a vertical hinge and an external display will take the spot of the smartphone mode. This is a big upgrade compared to the smaller 4.6-inches on the Galaxy Fold from last year.

With this upgrade, Samsung aims to give a full-screen experience on the inner and outer display. This will set the users on the trend of holding a 6-inch+ display that is omnipresent in the market right now. Hence, the newer Fold 2 will give a screen real estate that is 1.6-inches higher than the old device.

Further, Samsung is also expected to introduce the higher 120Hz refresh rate on the inner display of Galaxy Fold 2. This could be due to the trend the company is following in all of its flagships this year.

The higher refresh rate screens made a debut with the Galaxy S20 series back in March. Going forward, the company wouldn’t want to downgrade the user experience considering the price of the devices.

However, the outer display will have a 60Hz refresh rate. Also, the upcoming Note 20 is also expected to have a 120Hz refresh rate screen to continue the trend. 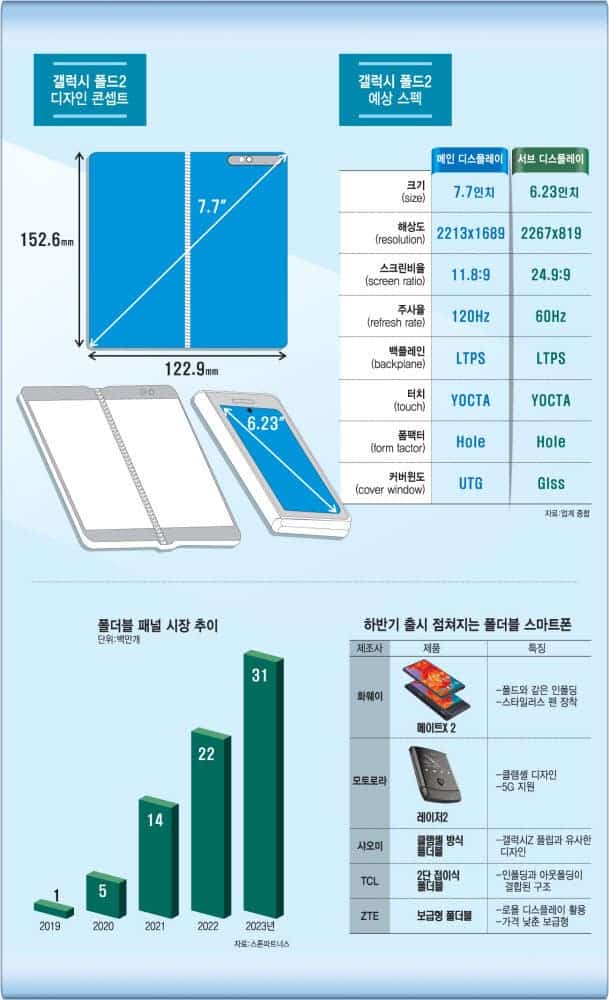 Talking about their specifications, the inner display will have a resolution of 2213×1689 pixels and an 11.8:9 aspect ratio while the outer one will have a 2267×819 with a 24.9:9 aspect ratio.  Both will have a punch-hole screen for housing a selfie camera.

The Galaxy Fold 2 will borrow the Ultra-Thin Glass from the earlier launched Z Flip. This will replace the older Fold’s transparent polyimide layer(PI) made by Japan’s Sumitomo.

Samsung made a breakthrough in the foldable glass segment by working with DoInsys in Germany. It added a tempered glass to the display which increased the durability to 30µm compared to the displays with a plastic screen mounted onto it.

When will it hit the market?

Reports also say that Samsung has already begun mass production of Fold 2 displays in May. It is expected to produce 300,000 units per month with an annual goal of 3Million units. As of now, it is rumoured that the flexible device could debut along with the Note 20 series in August via an online event but we will have to wait for official teasers from the company.

Next Presale offer for the new Redmi Router AX5 from Gearbest