Samsung recently launched the Galaxy A31 in India. The company has been debuting phones like crazy in the past few weeks or so. Now, a new Geekbench score has popped up for the successor of the Samsung Galaxy M31 soon. It’s called the Galaxy M31s and it’s very likely the first of a long list of iterative upgrades in the series.

The test results reveal a single core score of 347 while it has 1,256 points in the multi-core test. This is similar to the score on the previously launched Galaxy M31. 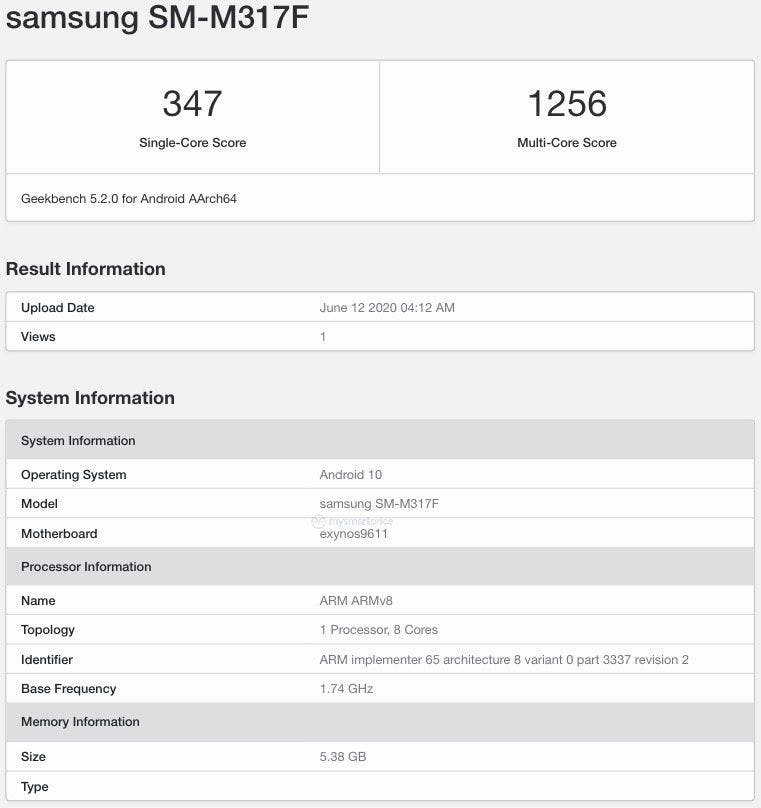 This is because the Galaxy M31s seems to be using the same Exynos 9611 SoC as the M31 with a base clock speed of 1.74GHz. Further, the device which has been tested has a 6GB RAM just like the M31.

This makes us wonder what could be the difference between the two. Well, the recent rumors point that the Galaxy M31s will have an AMOLED display just like the M31 but with an in-display fingerprint sensor.

Regarding the rear cameras, it is expected to sport a 64MP Samsung’s GW1 equipped quad-camera setup along with an 8MP ultra-wide and two 5MP sensors.

Front selfie shooter is likely to be a 32MP sensor. However, we have to wait for official info on the type of sensors that will be used here.

Other specifications will likely get carried over from the Galaxy M31 as the new M31s is expected to have a 6,000mAh battery with support for 15W fast charging. Additionally, it could also sport a 128GB as rumored earlier.

The listing also reveals that the device will run on Android 10 out of the box. This should mean the device could come with the company’s latest One UI on top.  Just like the M31, it is also expected to sport a Dual-SIM, USB-C, 3.5mm audio jack ports.

While there isn’t anything else to know about the device, it is yet to get an official word from the company. However, considering the Geekbench results, it looks like the device is not that far from hitting the center stage.

Previous Here is the PS5 in all its glory, coming in two flavours