According to Counterpoint, people in 2019 bought less refurbished smartphones than the earlier year. Formally, there is a decrease of 1%, and this is the first decrease in four years, but in general, the indicator is minimal.

In total, in 2019, 137 million refurbished smartphones were sold in the world. In the USA, China and Europe, interest in reconditioned devices is lower – a decrease of 6% on average was recorded there. The big decline was in Japan – by 8%. But in India, Latin America and Africa, sales of such devices increased: by 9%, 6% and 2%, respectively.

Apple and Samsung dominate this market, as these companies are actively promoting similar products. Huawei was also able to increase its performance, but US sanctions will have a bad effect even on this area of ​​the manufacturer’s business.

Refurbished phones are devices that were returned by their previous owners and repaired for resale. Unlike used smartphones, which are sold in the same condition that remained from the previous owner, reconditioned devices look like new due to cosmetic and technical improvements. Refurbished smartphones, as a rule, cost 10-15% less than new ones, and used products lose at least 30-40% in price. 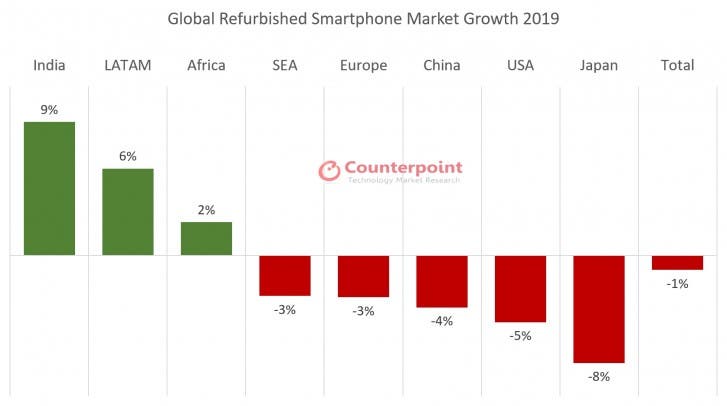 Smartphone sales declined in Q1 2020 due to COVID-19 pandemic

The COVID-19 pandemic is certainly impacting the global economy. However, analysts are beginning to speculate that the worst phase has passed considered that several countries are beginning to resume economic activities. We can see that several sectors accumulated losses during the past months, among them, we have the smartphone market. First, there were delays in the supply chain then a low demand. According to the European market research done by Counterpoint, the COVID-19 pandemic has caused a 7% market decline in Q1 2020 compared to Q1 2019. Also, it caused a 23% decline if we compare Q1 results with Q4 2019. Western Europe took the bigger hit with 9% on average while Easter Europe experienced about a 5% fall.

Moreover, the pandemic is making some customers adapt their update cycles. Most of them, now believe that 2020 isn’t the right year to upgrade a smartphone. Italy, for instance, took the biggest hit with a 21% decline compared to last year’s Q1. If we recall, the country also was one of the most affected by the pandemic. The report states that online retailers were able to offset the negative impact with more aggressive online sales schemes. The offline stores, in counterpart, had suffered a huge impact due to the lockdown policies. Interestingly enough, the Russian market has seen a small 1% decline.

Galaxy Z Fold 4 gets FCC certification; ready to launch in the US