The COVID-19 pandemic is certainly impacting the global economy. However, analysts are beginning to speculate that the worst phase has passed considered that several countries are beginning to resume economic activities. We can see that several sectors accumulated losses during the past months, among them, we have the smartphone market. First, it suffered from delays in the supply chain, now it’s being impacted with the low demand. According to the European market research done by Counterpoint, the COVID-19 pandemic has caused a 7% market decline in Q1 2020 compared to Q1 2019. Also, it caused a 23% decline if we compare Q1 results with Q4 2019. Western Europe took the bigger hit with 9% on average while Easter Europe experienced about a 5% fall. 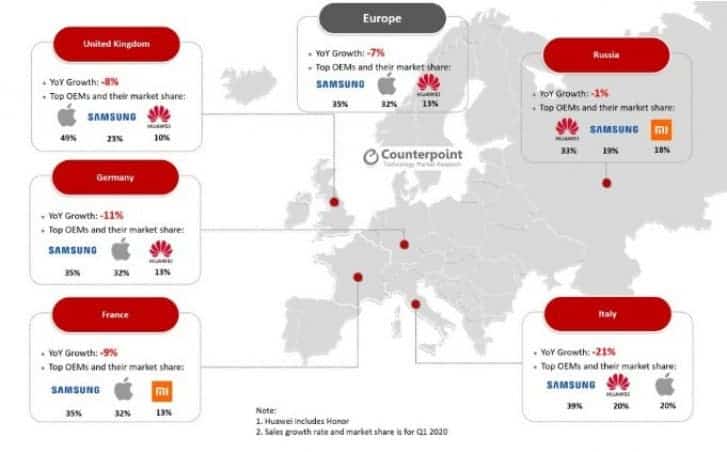 Moreover, the pandemic is making some customers adapt their update cycles. Most of them, now believe that 2020 isn’t the right year to upgrade a smartphone. Italy, for instance, took the biggest hit with a 21% decline compared to last year’s Q1. If we recall, the country also was one of the most affected by the pandemic. The report states that online retailers were able to offset the negative impact with more aggressive online sales schemes. The offline stores, in counterpart, had suffered a huge impact due to the lockdown policies. Interestingly enough, the Russian market has seen a small 1% decline as it was barely affected by the time the quarter ended.

When it comes to smartphone makers, Counterpoint research reveals that Samsung still has the lead with 29% of the market share. The Korean giant saw a 2 percentage point decline. Apple, the iPhone maker, experienced a 1 percentage point increase to its 22% market share. Huawei follows in third. It’s important to notice how the company is losing space due to the restrictions imposed by the US ban. For instance, the Chinese firm had 23% of the market share during Q4 2019. Now, it has just 16%, that’s a 7 percentage point decline in just three months. Xiaomi, on the other hand, has grown to 11% from just 4% in 2019. Customers are starting to shift interest to other Chinese companies. We expect to see a bigger Chinese presence in the next months as more and more companies are investing high in the European market. But, of course, the decline should continue as the first months of Q2 were also greatly affected by the lockdown policies.

We don’t expect to see a fast recovery in the smartphone segment as customers will be opting for essential goodies in the next few months.