Finding a gaming monitor with an adequate quality/price ratio is not an easy task. Xiaomi has tried to contribute to the appearance of such a device. To do this, on their own crowdfunding platform, they organized a fundraiser for a 27-inch gaming monitor.

The monitor will go on sale at a price of $310, but for the first to pre-order it, it will cost $268. It will be equipped with an IPS panel with a resolution of 2560×1440 pixels and the refresh rate brought to 165Hz. Among the characteristics mentioned we have a peak brightness of 400 nits, a response time of 1 ms and a gamut of DCI-P3 color gamut of 95%. The monitor comes with Adaptive-Sync technology and protection against harmful blue light emissions.

The set of interfaces includes DisplayPort and HDMI ports, a jack for 3.5 mm headphones and USB 3.0. The monitor comes with a 3-year warranty.

In total, this year the company should launch three monitors on the market, where in addition to the 27-inch version there will be options with 34 inches and a version with a resolution of 4K. It is possible that several more models of monitors may be released, but under the Redmi brand. 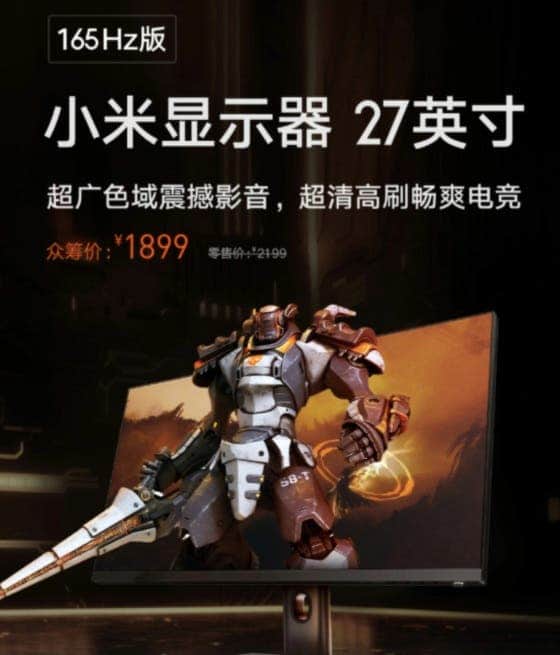 A few months back, Xiaomi launched a couple of monitors. They are called the Xiaomi Monitor and the Xiaomi Surface. The former model is for main tasks, while the latter is for gaming. However, after the separation of Redmi from the ‘mother brand’, we have seen a lot of cases when Redmi products make tough competition to it. So why can’t it be done in this field as well? Recently, there were rumors that the company is preparing to release the Redmi Display. Recently, we learned about some features of the upcoming monitor.

It turns out the Redmi Display will be 23.8 inches in size. In other words, this product will directly compete with the Xiaomi Monitor. Also, the source that revealed this information has done the same for the Xiaomi models. So there is every reason to think the information is quite accurate.