Chinese manufacturing giant, Huawei, is having a really tough time with all the ban by the U.S. in place. However, this is not stopping the company from consistent development. After the commencement of the ban early last year, many thought Huawei will go on its knees. To be sincere, the company has held on to its own for over a year now. In fact, it is still developing and launching new technologies. According to a recent report, Ophelia has successfully developed the thinnest periscope continuous zoom module. This module is only 5.9 mm thick. As of now, this module is already with Huawei for testing. 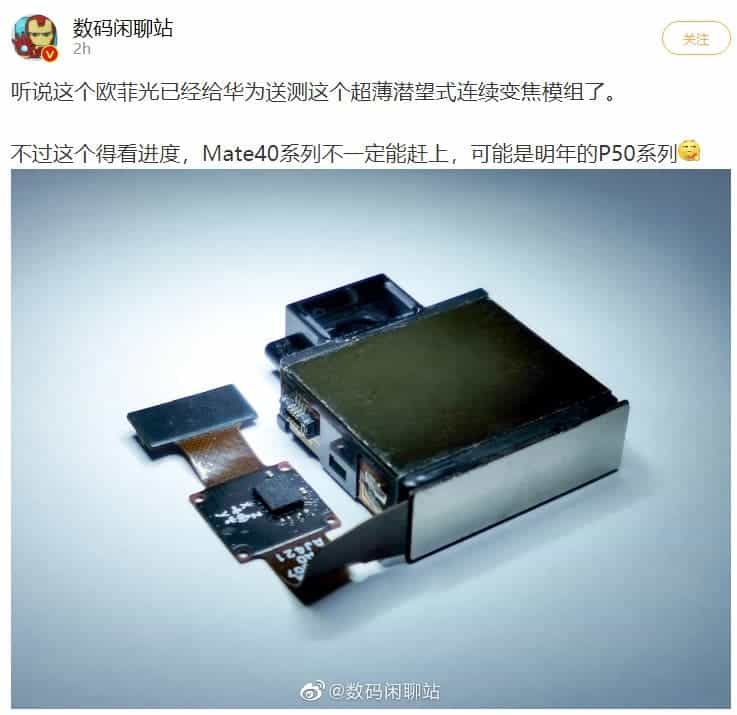 Popular Weibo leakster, Digital Chat Station, has reasons to speculate that this module will be used in Huawei Mate 40 or P50 series mobile phones. While the Huawei Mate 40 series will arrive later this year, the P50 will touch down early next year.

The 5.9mm ultra-thin continuous optical zoom module is developed by Ophelia Central Academy. The lens of this module is composed of 3 groups of “1GMO6P”. The equivalent focal length reaches 85~170 mm, and the aperture is 3.1~5.1. With this lens group, a single module can achieve high-power continuous zoom and real-time focusing. It can also maintain high-magnification continuous zoom resolution. Furthermore, it delivers high image quality in a focal length of 3 to 7 times. At the same time, with the support of long-axis piezoelectric motor technology, this product can effectively improve the stability, repeatability, and accuracy of the lens.

Although Huawei did not develop this technology, it will probably have the honors of launching it. This is another plus for Huawei smartphones which are currently struggling in the European market. However, make no mistake about this, Huawei’s smartphone business is doing well. In fact, the company recently surpassed Samsung to become the largest smartphone brand in the world. As hard as it is to believe, it is true.

Huawei may not be selling many phones outside China but its sales in China are more than magnificent. It appears that the more the U.S. fights Huawei, the more the Chinese feel a need to patronize the company. It takes only a few hundred of millions of units to become the largest smartphone brand in the world. However, China has billions of people and statistics show that almost everyone owns a smartphone. According to Counterpoint Research, Huawei has almost 40% of the Chinese smartphone market. So, we can now see why it is quite easy for Huawei to climb to number one.