Chinese manufacturing giant, Huawei, and its sub-brand, Honor, are still releasing multiple smartphones in the market. After the initial ban by the U.S. government, we thought that the company will slow down in some areas. However, that has not been the case and it appears as though the ban is even a catalyst for Huawei. While Huawei is working on the Mate 40 series scheduled to arrive later this year, Honor is on something else. Today, Honor officially announced some information regarding the upcoming Honor X10 Max. According to the company, the Honor X10 Max will arrive with an RGBW screen. This will deliver a higher brightness, low power consumption, and better overall watching experience.

This is a feature that has been used for Huawei’s flagship Mate and P series. The impact of this feature on the display is quite significant. This is another plus for the Honor X10 Max which obviously will arrive without GMS. However, Huawei should be used to releasing non-GMS phones by now. Its smartphone market is struggling in Europe no doubt, however, it is doing perfectly well in China. In fact, the patronage in China is massively increasing and the Chinese have the numbers. Thus, the spread may be poor but the figures are doing just fine. In fact, the Chinese manufacturer recently surpassed Samsung to become the number one smartphone brand in the world. 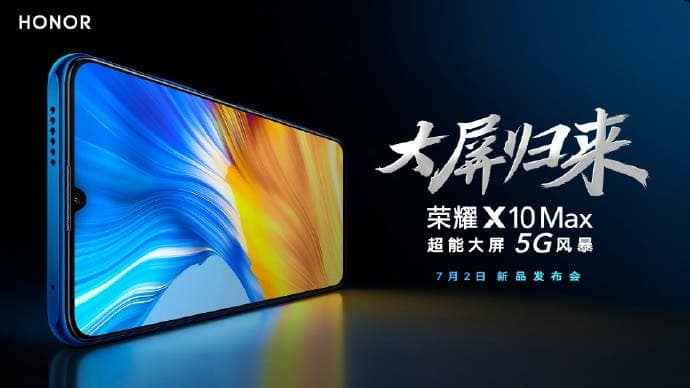 According to recent information, the display uses a waterdrop design and it will have a 2280 x 1080 resolution. Furthermore, this smartphone also comes with dual speakers as well as a side fingerprint sensor. At the same time, there are reports that the Honor X10 Max a 5,000 mAh large battery and supports 22.5W fast charging.