Being in the middle price segment, Samsung smartphones always find their buyer. The company has been producing mid-range models for several years, which, even if they cannot fully compete with the products of Chinese companies in terms of specs, they hold the company’s share in this range. In the latest M series smartphones, the main feature has become the large battery, and with the upcoming Galaxy M31S, Samsung is not going to change anything. 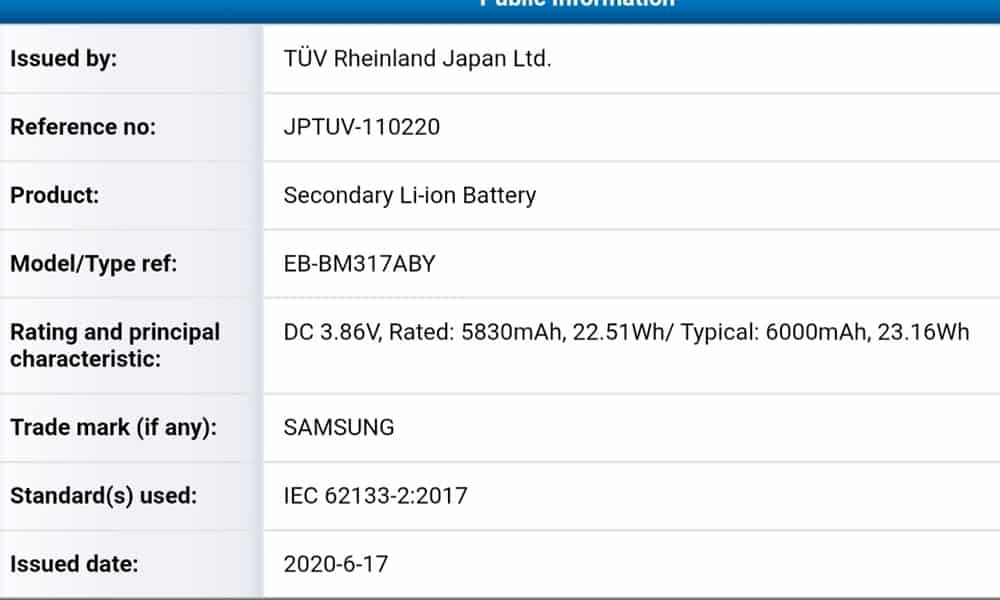 Today, the smartphone has been certified by TUV Rheinland. Thanks to this, we learned that the Samsung Galaxy M31S will receive a battery with a typical capacity of 6000 mAh. This is a good reason to purchase the smartphone because other brands on the same segment do not have a similar offer in this price segment.

Moreover, more major changes should not occur. The novelty will simply become a slightly improved version of the Galaxy M31, with the same plastic case, a 6.4 “screen and an Exynos processor.

In any case, the presentation of the new smartphone should take place very soon, and we will certainly inform you of the official information about the Galaxy M31S as soon as it appears.

Earlier, the smartphone has already appeared in the Geekbench benchmark platform, then we learned that it will receive Exynos 9611 and 6 GB of RAM.

Recall, the M series from Samsung has always been distinguished by good specs at an affordable price. This allowed us to realize significant savings. Now, although the Galaxy M31 was launched only in late February, it appears that the company is already preparing to launch its successor.

Here is a reminder of the specifications of the recently launched Galaxy M31 smartphone.

Next Honor X10 Max officially confirmed to use an RGBW screen