Samsung is currently working on a bunch of affordable smartphones namely Galaxy M01s, Galaxy M01 Core, and Galaxy A01 Core. Well, we’ve been hearing a lot about the s-variant of the original M01 smartphone. After passing through the WiFi Alliance and BIS certification, the M01s has now made its way to yet another certification. 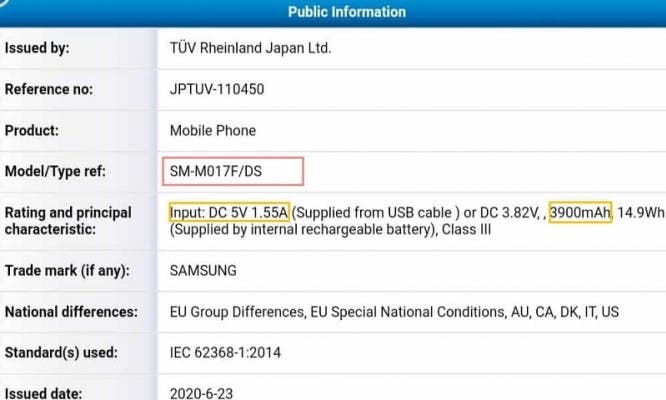 Samsung Galaxy M01s has now surfaced on the TUV Rheinland certification. As expected, the listing has now revealed some more information about the device. The device appears on the listing with the model number SM-M017F/DS. The listing further mentions the presence of a 3,900 mAh battery inside. Sadly, the listing doesn’t reveal anything else about the device.

With that said, the GeekBench listing did reveal a lot about the device back in May. To recall, the smartphone will run on Helio P22 chipset paired with 3GB RAM. In terms of storage, we should see 32GB of onboard memory.

Surprisingly, the device appeared on GeekBench rocking Android 9 Pie operating system. It is quite weird considering the original M01 uses Android 10 instead. Since the device is currently in the development stage, it is safe to assume that the final product will make use of Android 10.

Lastly, the device will be available in two different color options namely Blue and Gray. It is worth noting that the original variant will arrive in Blue and Red variants. We recently also saw the high-res press images of the Galaxy A01 Core device.

Even though the device has passed numerous certifications, there are still various aspects that remain unknown. We also don’t have the tentative launch timeline of the smartphone. If the device does launch in 2020, then it would be the first Galaxy M (2020) model with the ‘s’ suffix. Since the device is currently in the development stages, it is worth noting that the internals can change in the final variant. With that said, we are expecting more information to come forward.

Next Realme X3 receives its second software update, here's what it brings to the table