The market of gaming smartphones is becoming more competitive by the days. We can actually say that the most powerful gaming smartphones are pushing the technology in smartphones forward. After a few years of stagnation, companies are seeing a need for improving its hardware with new technologies. For example, the gaming smartphone trend pushed forward displays with high-refresh-rate, high touch-sampling rate as well as other advanced hardware features. Apart from not being present in this fight nowadays, we can say that it was Razer that started this trend of gaming phones in 2017 with the original Razer Phone. It was the first smartphone to arrive with a 120Hz display, the company, then released in the following year the Razer Phone 2. It was essentially the same phone with a few incremental updates.

We’re in 2020 and there are several uncertainties regarding Razer’s future smartphone business. It’s sad to see that the company leaving the segment especially when gaming smartphones are much more relevant than they were two years ago. Despite the lack of updates regarding new smartphones, the company is still supporting Razer Phone 2. If you have the company’s latest gaming smartphone, here comes some fresh air. The company is rolling out a new update carrying P-SMR4-RC001-RZR-200616.3181 update which bumps up the security patch to July 2020. Unfortunately, it still is based on Android 9 Pie. But it’s a bit better than the MR3 update that was built with March 2020 security patch. 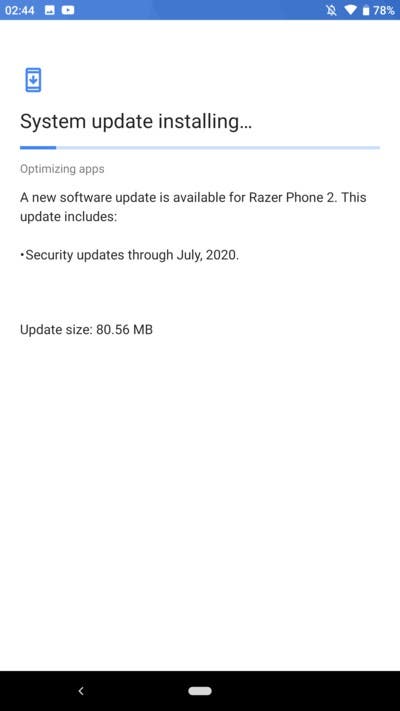 The company is yet to publish the updated factory image on its official download website. For that reason, if you’re not familiar with the manual flashing process you’ll need to wait for the OTA to reach your smartphone. If you’re wondering if there will be any update on Android 10, no, we don’t think so. The Razer Phone 2 received an Android 9 Pie update in February 2019 and since then, the company has been rolling out security patches only. That’s a shame since the handset runs a vanilla-like Android build.

In case you’ve forgotten, the Razer Phone 2 was revealed in 2018 with a Snapdragon 845 chipset coupled with 8GB of RAM and just 64GB of Internal Storage. However, the phone supports microSD card expansion. In the camera department, we have a 12MP shooter coupled with a 2MP secondary sensor. This setup supports OIS and PDAF phase focus. Upfront, we have a single 8MP selfie shooter. The handset draws power from a 4,000mAh battery with support for QC 4+ fast-charge and wireless fast-charge. It lacks a 3.5mm headphone jack but it’s dust and water-resistant thanks to IP67 certification.