Chinese manufacturing giant, Huawei, is getting set to unveil the Honor X10 Max on July 2nd. In recent times, we have seen a couple of official confirmations regarding this smartphone. According to the latest official poster, this smartphone will support multi-function NFC. Honor officials say that the Honor X10 Max will support smart card selection NFC. This will avoid the cumbersome manual card selection and bring a smarter card swiping experience. 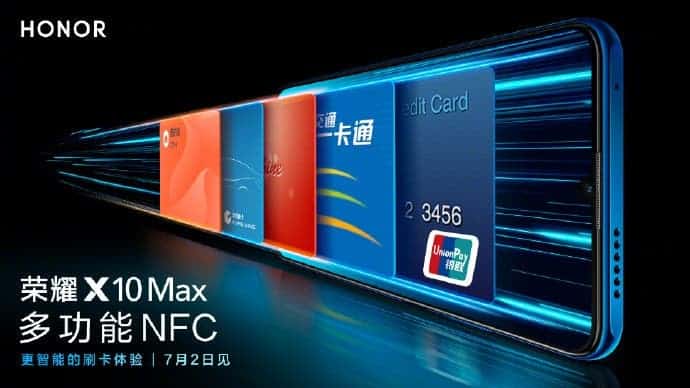 A few days ago, the Honor X10 Max with model number KKG-AN00 appeared in the Geekbench 5.1 database. The device comes with the MediaTek MT6873 processor, this is the Dimensity 800 5G SoC. This chip is a 5G 7nm Soc that uses a quad-core A76 + quad-core A55 design. It clocks 2GHz and comes with an integrated NATT MC4 GPU. It supports 16GB LPDDR4X memory max and 1080P 120Hz screen.

According to TENAA, this smartphone will come with a 7.09-inch LCD screen and the supplier of this display is JDI. This screen supports 100% DCI-P3 color gamut and the highest brightness is 780nit. This display uses RGBW technology that Huawei Mate and P series have used. The RGBW technology offers better screen brightness and power reduction. According to recent information, the display uses a waterdrop design and it will have a 2280 x 1080 resolution. Furthermore, this smartphone also comes with dual speakers as well as a side fingerprint sensor. The dimension of the smartphone is 174.462 × 84.91 × 8.3 (mm and it weighs 227g

There are two cameras on the rear, a 48MP main camera and a 2MP macro shooter. On the front, this device comes with an 8MP shooter. In addition, this device may come with a MediaTek Dimensity 800 5G chip. We expect to see 6GB/8GB RAM and 64GB or 128GB ROM storage with support for storage expansion. Honor X10 Max also has a 5000 mAh capacity battery, supports 22.5W fast charge, and is pre-installed with Magic UI 3.1 system based on Android 10.

Features like the RGBW technology are a plus for the Honor X10 Max which obviously will arrive without GMS. However, Huawei should be used to releasing non-GMS phones by now. Its smartphone market is struggling in Europe no doubt, however, it is doing perfectly well in China. In fact, the patronage in China is massively increasing and the Chinese have the numbers. Thus, the spread may be poor but the figures are doing just fine. In fact, the Chinese manufacturer recently surpassed Samsung to become the number one smartphone brand in the world.

Previous IDC: China's IT spending will exceed $29 billion in 2020