A new smartphone from ZTE has made its arrival on the Google Play Console. The device in question bears the model name Z5157V. Looking at the specifications it seems to be quite similar to the Blade A3 Prime launched on Yahoo Mobile and Visible earlier this month with a $99 price tag. Apparently, the new device is an Android 10 budget smartphone reaching Verizon. The A3 Prime was released on these Verizon-based MVNO networks, and the “V” on the name of ZTE Blade A3v suggests that it is a carrier-branded smartphone.

Under the hood, the ZTE Blade A3v boasts MediaTek’s Helio A22 chipset. This particular CPU consists in 8x Cortex A53 cores clocked at 2.0 GHz and a PowerVR GE8300 GPU clocked at 660MHz. The device is connected to 2GB of RAM, and we assume that it has at least 16GB of RAM. Although there’s no word on the storage, it’s very common to have a 2GB + 16GB combo in low-end smartphones. If that isn’t the case, we still don’t expect more than 32GB of Storage. The device probably has microSD card support.

The device’s display has 720 x 1440 px resolution and a pixel density around 320 dpi. This suggests a display of around 5-inches. That makes sense as the ZTE Blade A3 from 2019 offers a 5-inch display while the A3 Prime flaunts a bigger 5.45-inch panel. The very same Blade A3v bearing Z5157 has paid a visit to FCC and Bluetooth SIG certification in May. For that reason, we believe that ZTE is just waiting for the appropriate time before releasing this smartphone.

Of course, we’re not expecting a huge launch, perhaps just a quiet one. The Blade A3V is not the kind of device that steals the headlines. It will probably pop-out quietly across stores in the United States. Most likely, via Verizon’s stores or through some of its partner networks. 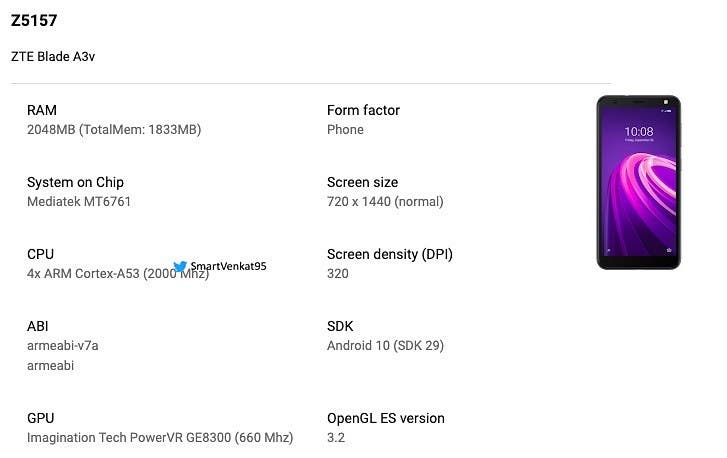 It’s interesting to see how ZTE is expanding its offer of budget smartphones in the country. The company passed through a very complicated situation in 2018 when the US Government determined it as a threat to national security. Instead of it being part of a campaign against China, the move was due to the fact that ZTE has supplied equipment to Iran violating certain sanctions applied by the US administration. After months of negotiations, the company had to change its whole administration to meet US requirements.

Next Samsung has no plans of attending IFA 2020