Rumors about the release of the long-awaited update with a dark theme for several popular Google applications have been going on for several weeks, but, today, the update has finally arrived.

Google has added the dark theme to some of its apps

A dark theme is now available for anyone who installs the latest version of Google Docs, Sheets or Slides – all three programs have been updated. If you have already switched your smartphone to night mode, applications will adjust automatically.

However, a way to manually switch the theme is also provided. Simply go to the menu, then click on the “SETTINGS” and there select “theme” and then just change it. 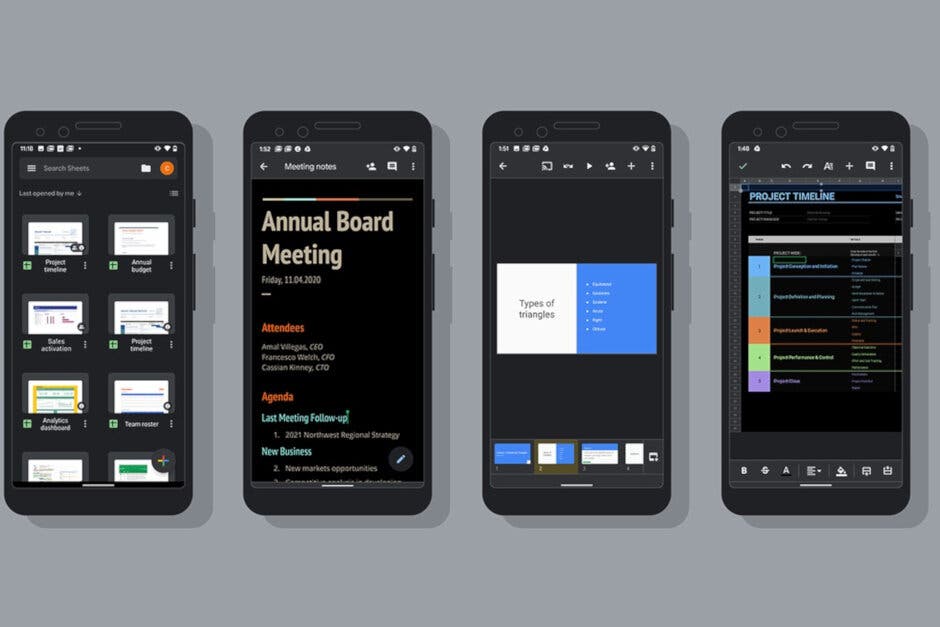 The night mode is useful in low light conditions, when the bright white color seriously strains the eyes. It also optimizes battery consumption for AMOLED screen users. The ability to switch the theme to the night one has long appeared in Android, but Google continues to add it to its applications until now.

Google has been updating its native apps every now and then with new features. Recently, the Lens app was spotted in the beta getting solving math equations. Also, the latest update comes in the form of the Dark Mode to the famous Google App.

According to reports, Google is finally rolling out the highly requested Dark Mode features to both Android and iOS users, as tweeted by Google’s search liaison. The new feature adds built-in Dark Mode for users running Android 10 and iOS 12/13.

The app will set its preference according to system settings by default on Android 10 and iOS 13. This means the app will turn on Dark Mode by default If you have the system-wide Dark Mode enabled on your Phone. However, users can now manually toggle the mode within the app inside the settings option as well. Additionally, iOS 12 users will be able to do the same.

If we recall, Google had announced the Dark Modes for other apps like Google Keep, Google Files, Google Photos at the launch of developer preview last year and rolled them out to all users during the release of stable Android 10 back in September. But the update for the Google App was in the test phase till now.

However, some users reported that they were able to spot the dark mode for Google App back in June last year. This feature was partially applied to a few windows of the app and limited to only a few users.

But now, the latest update is rolling out to all the users of the Google App. The rollout will begin today and reach everyone by the end of the week. You can try out the new Dark Mode by updating it to the latest version in the Play Store.

Next Official: OnePlus Nord will be presented on July 21 using AR