Samsung has pretty much established the Galaxy A and M series as two of the most competitive lineups in the mid-range and low-end smartphone market. This year the company introduced the Galaxy A01 and M01 as two super-affordable smartphones with low-end specifications. These handsets aimed at the less exigent users that just need an average performance on a smartphone or that can’t pay too much for it. Now, the company is giving a step further by introducing a device that is even more affordable, hence, less powerful – The Galaxy A01 Core.

The handset was first seen late last month in the Google Play Console listing and in the Bluetooth SIG certification documents. We even got a glimpse of the handset’s design thanks to some official-looking renders. Now, the device passed through the doors of Thailand’s telecom regulator NBTC. When a smartphone starts to pass some important certification processes like NBTC we can pretty much say that it is nearing the shores and launch isn’t too far away. 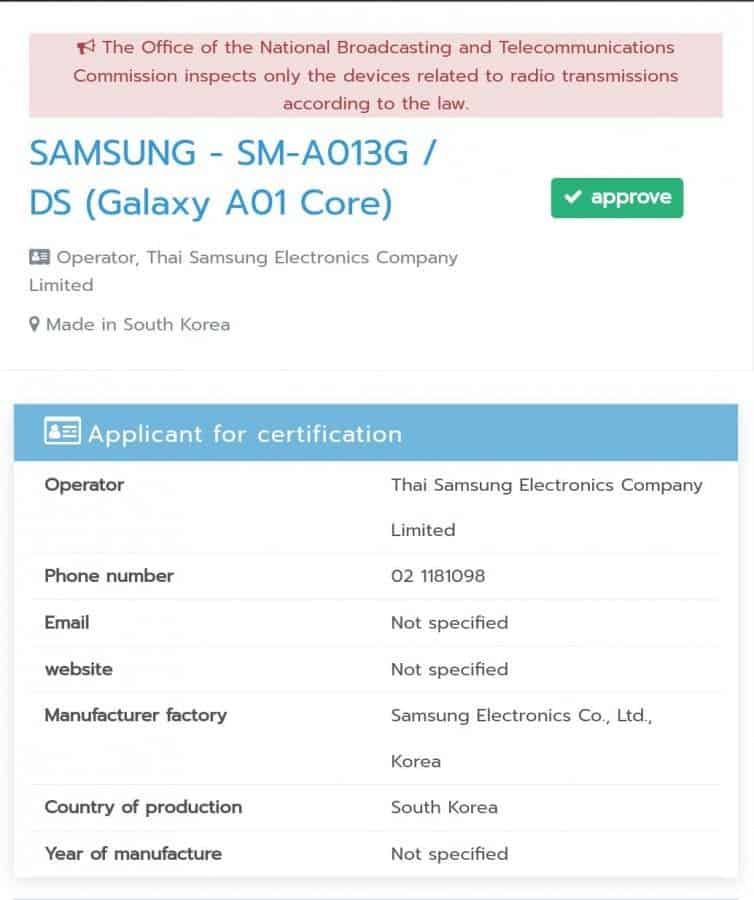 The NBTC database, unfortunately, doesn’t reveal much about the specifications of the smartphone. However, it confirms the fact that has dual-SIM capabilities. This bit is also confirmed by the fact that the phone carries “DS” in its model name, same as in the Bluetooth listing.

According to previous reports, the handset will boast a 5.1-inch PLS TFT LCD panel with a 720p resolution. Moreover, it will carry the old MediaTek MT6739WW which is a Quad-Core CPU with 1.3GHz clock. Interestingly enough, the Bluetooth SIG certification lists the device with Bluetooth 5.0 support. However, this chipset only supports up to Bluetooth 4.1. We are a bit curious to see how the company is achieving BT 5.0. Perhaps, it’s just a mistake in one of the certification documents. Other speculated specifications include 1GB of RAM and Android 10 OS. Rumors says that this will be the first Samsung Galaxy phone with Android 10 Go Edition.

In the camera section, the phone should have an 8MP primary sensor with f/2.2 aperture and a 5MP selfie camera with f/2.4 aperture. The handset draws power from a removable 3,000mAh battery which is limited to micro USB port charging rates. Other features include a 3.5mm headphone jack and microSD card support.

The Galaxy A01 Core may be just the beginning of a new wave of super-affordable and modest smartphones from Samsung. According to recent reports and Wi-Fi Alliance certification, the company is also working on a Galaxy M01 Core.