TikTok is probably one of the most controversial apps in the market. While this app is very good in what it does, it has gotten some “bad reports” in recent times. However, this is not changing anything about its finances. In fact, its financial situation is increasing. The Chinese short video application has gained traction in many countries. However, it is getting banned in some spheres, most recently India. Recently, TikTok released a transparency report for the second half of 2019 (July to December 2019). The report details the government’s video offline request and deleting videos that violate its policies.

According to TikTok, it had almost 500 million videos in the second half of 2019. This means that the deleted 49 million only accounts for about 1%. The company did not disclose the nature of the videos but said its AI system removed 98.2% of the videos before users reported the videos. TikTok also added that 89.4% of these deleted videos did not receive any page views. 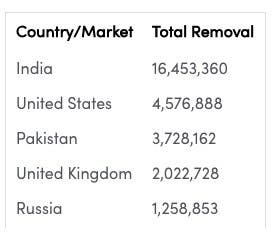 India also ranks first in terms of government requests for user information and the deletion of content. Indian authorities requested TikTok to provide 302 user data and 30 content deletions in the second half of 2019. However, TikTok is no longer active in India. However, before the ban on TikTok in India, the short video application had more than 200 million users in India.

Last week, research agency, Sensor Tower, issued a report saying that in May this year, Douyin and TikTok attracted more than $95.7 million in the global App Store and Google Play, an increase of nearly 10 times from the $9 million in the same period of the previous year.

Looking at TikTok’s revenue, about 89% of the revenue comes from the Chinese market. Interestingly, the US market ranks second, contributing 6.2% of the revenue. In the third position is the Turkish market, accounting for 1.2%. See the chart below for the complete list of the top 10 global mobile app revenues.

Well, TikTok attracted more funds than heavyweights like YouTube in the second position with a revenue of $78.4 million. For YouTube, this figure is a 77.3% increase over the same period of last year. American users contributed 55.7% of YouTube’s revenue, followed by Japanese users, accounting for 11.8%.

According to statistics, the country with the most installed TikTok apps in May is India. Of 111.9 million downloads, India accounts for over 20% of the total downloads. Despite several warnings from top U.S. officials, the United States still accounts for 9.3% of its downloads. From the perspective of mobile phone systems, TikTok ranks first in Android downloads in May. However, for the iOS system, it ranks second, behind online meeting software, Zoom.

TikTok’s US advertising revenue will reach $5.96 billion this year

TikTok will ban certain content for young users under 18