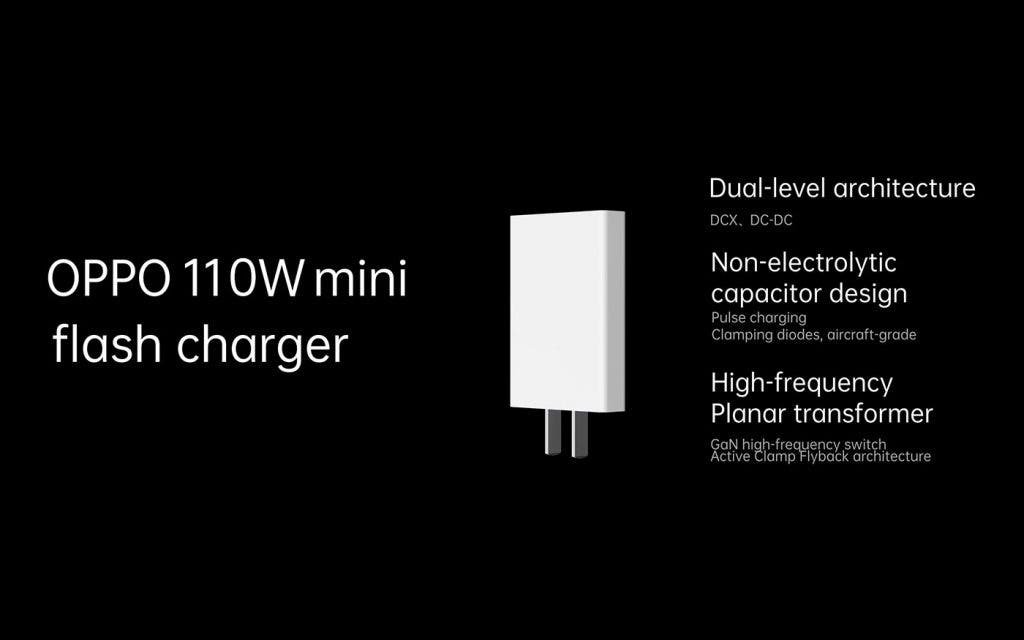 For the first time, Oppo says it was able to increase the power of the miniature charger to exceed 100W. According to the company, it used an electroless capacitor design, pulse charging, and high-frequency flat transformer technology to reduce the number and volume of components in the charger. This charger places much emphasis on breaking the volume and efficiency limits of high-power chargers. Oppo had to use a groundbreaking two-stage architecture to achieve high-efficiency power conversion and temperature control.

According to reports, its USB-C interface supports mainstream charging protocols such as VOOC, PD, PPS, and QC. It also supports up to 65W PD&SuperVOOC, 110W PPS, 36W QC, and 30W VOOC. With these, this charger can charge most electronic devices on the market. This obviously includes OPPO mobile phones, smart devices that support PD/QC, and office laptops that support PD.

The mini 50W and 110W Flash chargers use GaN(Gallium Nitride) for conducting high voltages and currents at a small size. Unfortunately, the company did not announce the price and availability of this device.

How is the Oppo 110W super flash mini charger so small

Firstly, we should know that the 110W mini flash charger is built upon the combination of laminate and compact structures. This eventually minimizes its size to just 35.76 cm³ – similar to the size of a normal 18W charger. Oppo’s 110W mini flash charger had a significant breakthrough in the size limit and efficiency of high-power adapters. However, how did Oppo manage to do this? Here are a few points to give us a glimpse of what Oppo actually did