After planning to go big in India, Foxconn Electronics looks to turn its fortunes by investing more in China. An advanced semiconductor assembly and a test plant at Qingdao in the Northeast of China is being planned by the company. According to the reports, the investment will steer chip solutions for 5G and applications pertaining to AI.

Sources for Digitimes have said that the Taiwan-based Hon Hai Precision Industry Ltd., will invest a whopping CNY60 billion ($8.6 billion) on the new project. Interestingly, China’s state-backed Rongkong group will co-fund the project. The plant is expected to be ready for production as early as 2021.

This seems understandable as the Chinese Government itself has been spearheading the train of a wider rollout of 5G technology within the country. The country aims to ditch the older 4G completely by the end of 2020.

The new factory at Qingdao will reportedly focus on improving the chip solutions for 5G equipment and AI device applications. This is done by improving the packaging technologies of the semiconductor fabrication process.  For this, it will use techniques like fan-out, wafer-level bonding and stacking. These are basically the technologies of packaging an integrated circuit while still remaining to be a part of the wafer.

It is reportedly more effective than the conventional method of slicing the wafer into individual circuits and packaging them later. Further, the factory at Qingdao will be designed to support this with a monthly churning out capacity of 30,000 12-inch units. 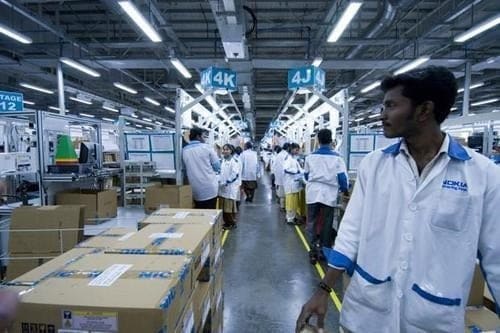 However, despite being ready for production by 2021, the report says Foxconn will be able to scale up to commercial levels only by 2025. While the reason for the delay is unknown, this news can impact the local semiconductor industry in China.

Will it survive despite the competition?

As recalled by Digitimes, Foxconn had earlier laid the foundation in 2017 for a subgroup. This was in order to surface more local products and grow the silicon business on Chinese soil. Following this, the company had tied up via various agreements with local governments like Zhuhai, Jinan and Nanjing to further improve participation.

Further, it also has a threat from Luxshare, which is one of its competitors for assembling Apple products in China. Luxshare has now acquired two of Wistron’s foundries in China for $472 million. It is expected to snatch a bite in iPhone production by 2021.

However, with the latest development, it looks like Foxconn is showing no signs of slowing down.

Next OnePlus Nord wallpapers are already available for download