Microsoft will unveil a new foldable Android phone. But that’s not what you expecting! The Surface Duo was unveiled back in October last year and rather than a foldable display, it’s a dual-screen device with a hinge between the two panels. Despite its big reveal, the company still hasn’t brought it to the market, but there is a tentative released aiming at the 2020 holiday season. The handset has been a target of multiple rumors in the past few months. Some of them were even suggesting an earlier release. After all, the device is likely coming with Snapdragon 855 which is not the ideal at this point. Today, consistent proof that the Surface Duo still is a thing that has emerged through Bluetooth SIG database.

The device was spotted at the Bluetooth regulatory agency with Surface Model 1930 codename. Unfortunately, these listings don’t reveal much regarding the specifications. Of course, Bluetooth 5.0 is confirmed here. Luckily, the device also paid a visit to FCC listing which confirms the presence of Android 10 alongside support for all major LTE bands in the United States, NFC and 802.11ac Wi-Fi. Unfortunately, the device will lack 5G connectivity. The original project didn’t include 5G, and we assume that there’s no room enough for fitting Qualcomm’s separate 5G modem. 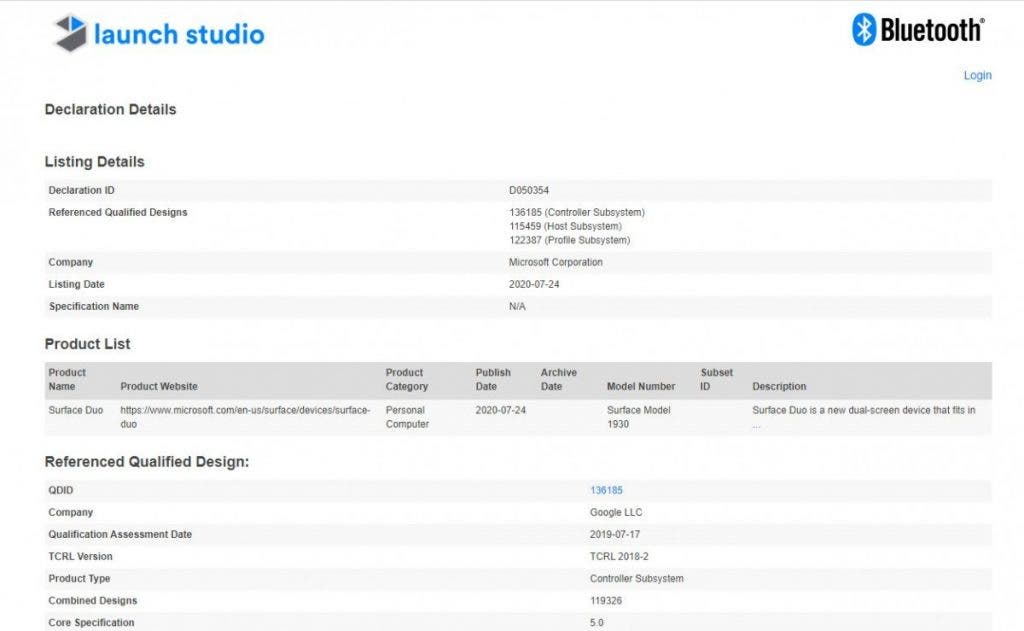 Other details regarding Microsoft Surface Duo include the two identical displays with 5.6-inch diagonal and AMOLED quality. Under the hood, we have the aforementioned Snapdragon 855. It sounds outdated, but you need to remember that it can only be outperformed by 2020 flagship chipsets. So it still is a powerful chipset. The phone will come with Android 10 and all set of Microsoft applications. According to other reports, Microsoft is already working on an Android 11 update to ensure a quick transition to the newer platform. After all, the company should give all the right steps to consolidate is device in the market. It’s not a common smartphone, so it needs to come with a good level of software support to conquer its user base.