The market of Ebook readers may be slow these days, but this is not preventing companies from playing with the segment. Last year, Xiaomi announced its very first ebook reader called the MiReader. Unfortunately, this product is something that we global costumers can’t get unless we import it from China and deal with all the language limitations. The product has been exclusive to Xiaomi’s stronghold, but according to a new certification, it may finally reach the overseas market as Mi Ebook Reader.

The upcoming Mi Ebook Reader has been spotted on the databases of the Bluetooth SIG. The device received its Bluetooth certification on July 32. The certificate reveals that it will connect via Bluetooth 5.0 connection. The company has been releasing some of its products outside of China recently in a bid to expand its global ecosystem. If you’re familiar with Xiaomi, you know that the company has a myriad of different products other than just smartphones. Unfortunately, just a few of these products make way to the West. A few weeks ago, the company announced its Mi Portable Electric Air Compressor in India. The product was released in China more than a year ago before getting its global reveal. The Mi Notebook PCs have also made their way out to China achieving certain popularity. It’s no surprise to see the MI Ebook reader leaving China. 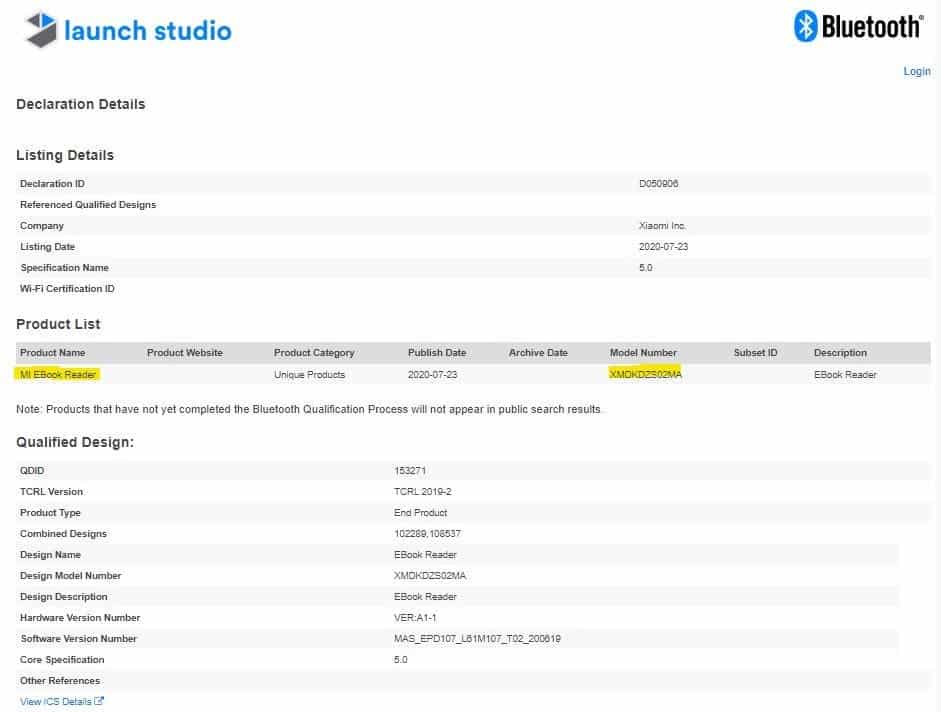 The original MiReader has a 6.-inch e-Ink screen with 221 pixels per inch. There is also a 24-level adjustable front-lit LED. Therefore, users can read it even in the dark. Under the hood, it boasts an Allwinner processor. Remember Allwinner?. This chipset delivers enough performance an Ebook reader needs and it’s coupled with 1GB of RAM and 16GB of storage. That’s a good amount of space for storing several ebooks. The e-Ink reader offers support for several file formats. The list includes epub, PDF, DOC, XLS, and TXT. Users can easily sideload their own content onto the handset.

Unfortunately, we can’t say how soon the Mi Ebook Reader will launch in Global markets. Moreover, we don’t have an exact idea of which are the countries getting contemplated with this new piece of Xiaomi’s technology. More details will emerge soon. By the way, we are curious to see how this product will perform in countries that are slightly dominated by Amazon’s e-Ink readers.