Nubia is building up for the launch of its Red Magic 5S with teasers on Weibo. Alongside the gaming smartphone, the company was expected to reveal a wearable device and has finally confirmed the Nubia Watch moniker via an official poster besides showcasing the Flexible OLED display and better build quality.

The official teaser on Weibo confirms that the Watch will debut on July 28th and showcases the design of the watch in all its glory. Right from the first look, the display part of the teaser attracts our attention as it flexes out into the strap region. The display also has a metric scale on the right side.

As we look beyond the display, the rear of the watch seems to have a flexible portion of the strap probably to support the display bending above it. The strap hooks and the base of the watch do look premium as the teaser confirms that the Wearable device will have a combo of 316L Stainless steel and Aluminium built on it. 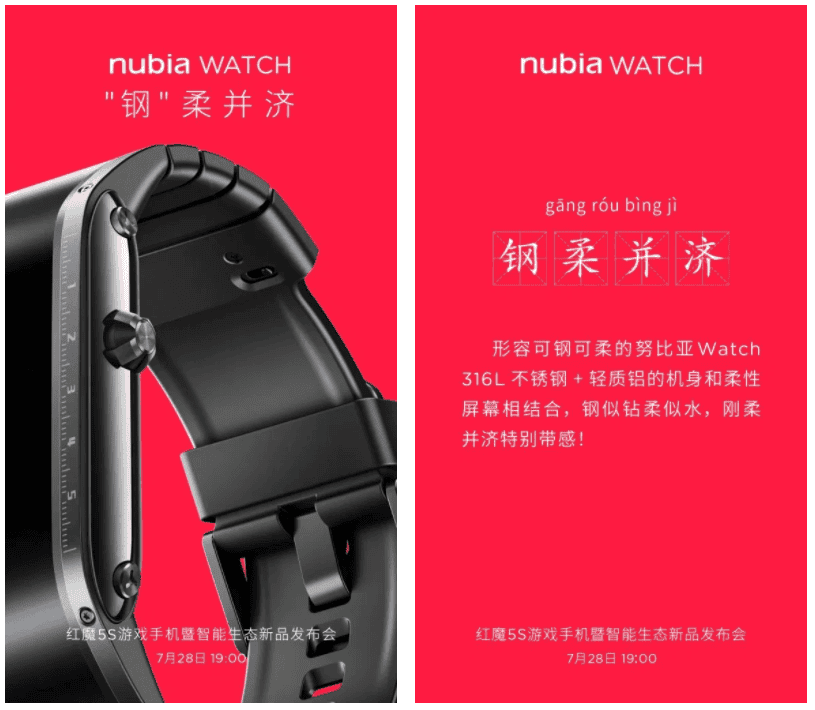 Nubia Watch: What to expect?

There is a crown at the centre of the right side and two circular buttons on either end. Also, the Watch will have an OLED display which is understandable considering last year’s Alpha wearable smartphone had the same.

That said, Nubia is yet to officially disclose more about the device. Last year, it launched the Nubia Alpha projecting it as a smartphone which is wearable in hands. While the Nubia Watch looks a lot like the Alpha it is unclear if the device will be a successor to the Alpha and be promoted as a wearable smartphone or just a smartwatch. The official poster suggests the secondary.

Also, the internals of the device including the software is yet to be revealed. Last year, we saw a heavily customized version of the Android on the Nubia Alpha and the new wearable device could very well host a similar version of the software.

A few days back, the Watch was listed on China’s JD.com for reservations with posters carrying a slogan ‘urban adventurer’. While the watch was expected to be unveiled soon, the poster images confirm that it will debut alongside the Red Magic 5S smartphone that is said to come with Qualcomm Snapdragon 865+ SoC.

Let’s wait for more teasers from the company to know more about it in the next few days.