Apart from its flagship lineup, Samsung seems to be working on numerous budget and mid-range devices as well. One such smartphone is the upcoming Galaxy M51. Since the last couple of months, we’ve been hearing a lot about the device but not from the brand itself. Last month, the device made its way to the GeekBench listing, and soon we started hearing more about the internals. Well, the device has now landed at the WiFi Alliance for certification, of course. Considering this new development, it looks like the device is inching closer to its official launch. 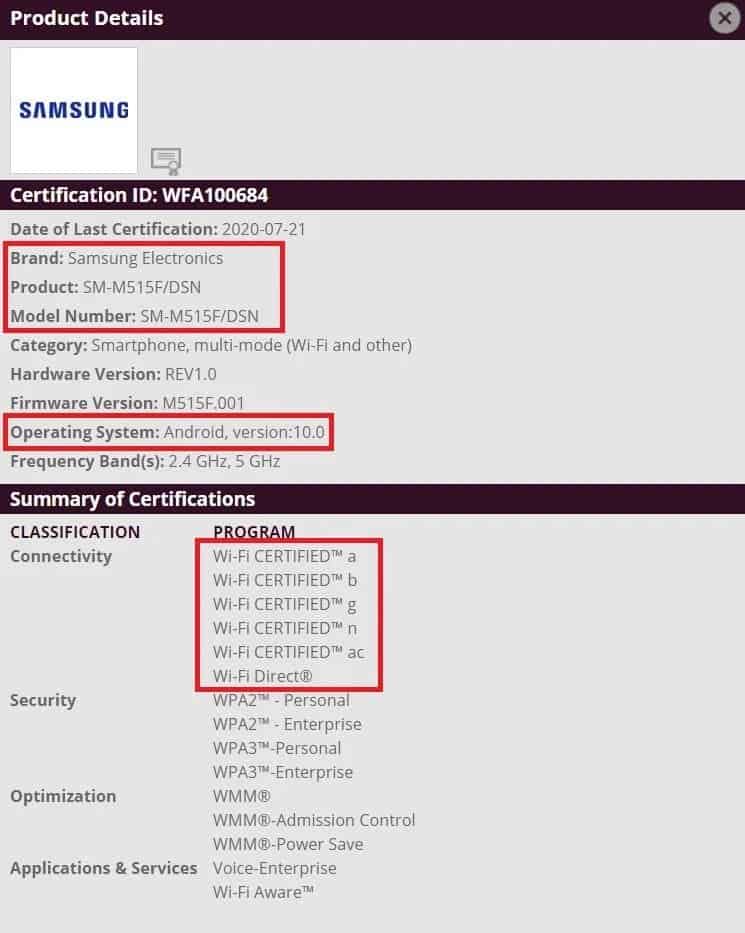 Samsung Galaxy M51 has appeared on the WiFi Alliance touting the model number SM-M515F/DSN. Since it is WiFi Alliance we’re talking about, the documentation has revealed some key information as well. It looks like the device will offer dual-band WiFi connectivity, WiFi Direct, and will run on the Android 10 operating system. The device will also come with a dual-SIM card slot which has now become the standard.

With that said, this small connectivity information is not the key takeaway from the WiFi certification. The thing to note here is the fact that the Galaxy M51 might be inching closer to the official launch. Generally speaking, a smartphone sees its official launch in a month or two after appearing on WiFi Alliance. This development also falls in line with the previous report claiming the phone will only launch in India in September. The report further adds the reason behind the delay is the ongoing production issues due to the pandemic. If that’s the case, then the smartphone should see its launch before September at least in other regions.

Samsung Galaxy M51 is expected to arrive with a 6.5-inch Super AMOLED Infinity-O display featuring a punch-hole cutout in the middle. Under the hood, the device should run on Snapdragon 730 chipset paired with up to 8GB RAM and 128GB onboard storage. Just like with other devices in this segment, this one too will flaunt a quad-camera module on the back. We should see a 64MP primary sensor paired with a 12MP ultrawide lens. What’s surprising is the battery capabilities of the device. Various reports have pointed towards a massive 7,000 mAh battery with the support of 25W fast charging.

Next Xiaomi patent a smartphone with a built-in wireless headset