Nubia recently unveiled its new gaming smartphone with a wireless cast solution that allows users to mirror the smartphone’s display on a monitor or TV. Now, Xiaomi’s BlackShark 3S decided to reveal that they are going for a USB-based solution, that should be faster and more reliable than a wireless one. The new BlackShark 3S may not be revealed soon, but the company is keen that it can slowly build some hype for it. The company wants to ensure that the Black Shark 3S will be its ultimate gaming smartphone.

The phone boasts the latest JOYUI 12, which includes support for screen mirroring over USB 3.0. This is the standard USB Video Class protocol making used by webcams. You can hook up the phone to a computer, run the Black Shark app companion, and then you will be able to see the phone’s display mirrored on the computer-rendered at 60fps. The phone’s own AMOLED display will go up to 120Hz refresh rate. The app takes your keyboard and mouse input and then forwards it to the smartphone. You can see this in action through the video below. Yeah, Black Shark is not shy in showing its smartphone before its big reveal.

You can play using just the smartphone of course. This can be achieved through motion sensors. The gyroscope will track the phone’s movements and allows you to perform six gestures in total. This also frees your fingers allowing you to assign some actions to simple motion movements. You can also clip an accessory that adds should keys. The new accessory will be compatible with older Black Shark phones as well. You can have a full-fledged gaming experience using just the phone. 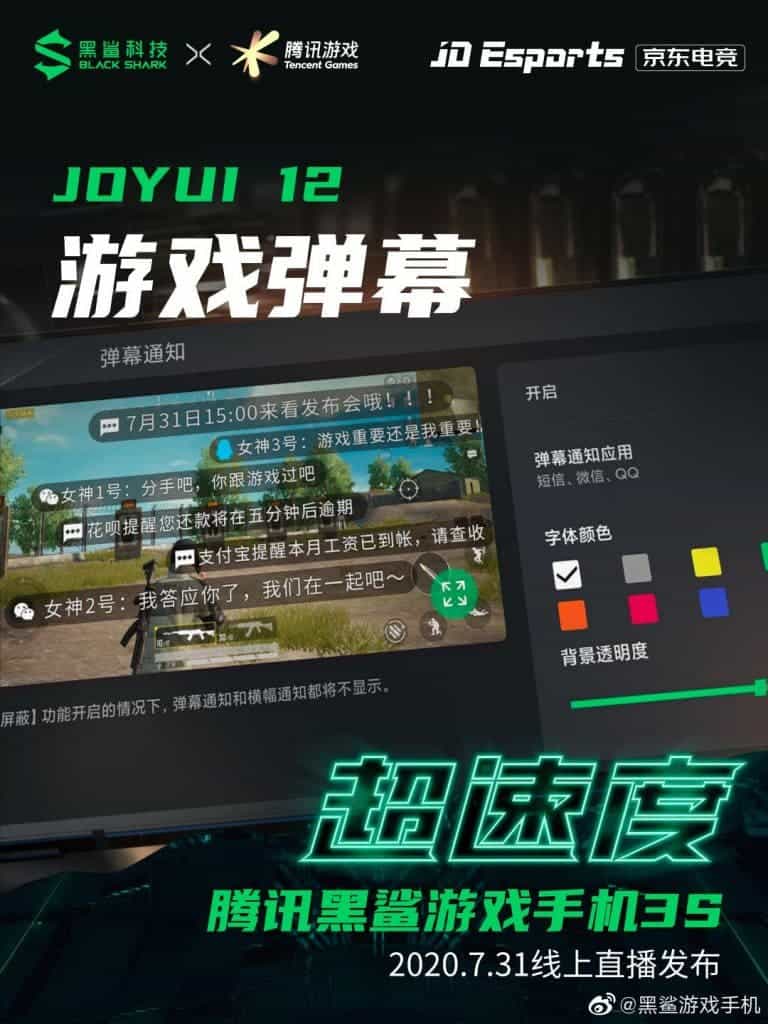 The company is also teasing another interesting feature coming from its JOYUI 12. That is the Game Barrage feature. It shows notifications from SMS, WeChat, QQ, and others overlayed on the game screen. Unlike chat heads, these will show the full message. You can even control the text color and the opacity of the messages. There will be some filtering allowing the user to control which notifications will pop out to prevent this feature from becoming a mess. Of course, the phone also supports voice commands. Therefore, you’ll be able to capture screenshots, start screen recording, answer more calls, and more without taking your finger off the controls.

While the company keeps its teasing campaign, we still need a word on the Black Shark 3S actual release. More details should emerge soon.