For the last couple of months, we’ve been hearing a lot about the Xiaomi Mi TV Stick. Earlier this month, the smart product even appeared on the FCC listing for certification. Well, it looks like the Chinese smartphone maker is now finally ready to launch the product. Xiaomi India recently teased the product on its official Twitter account. Fortunately, the teaser also reveals the official launch date for the offering.

Xiaomi will launch Mi TV Stick on August 5 in India 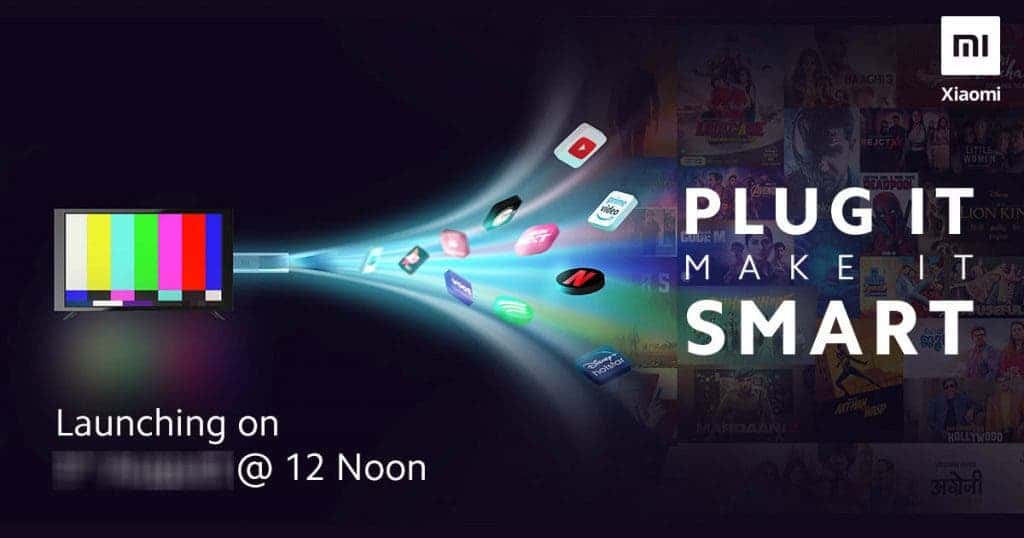 Xiaomi is touting the hashtag #PlugItMakeItSmart on its posts and seems to be taking the jab at Amazon as well. The post reads “the fire your TV has been missing”. The attached image showcases a television with a stick like a device attached to it. Clearly, the product the brand is teasing is the Mi TV Stick that has been making its round on the internet for months.

The Mi TV Stick will see its official launch on August 5 at 12 noon. The product page on the company’s website also teases some key features. The TV stick will support all the popular streaming services such as Disney+ Hotstar, Netflix, Prime Video, and Spotify. The product will also make use of the latest operating system. You will also be able to download other applications from the store.

LAUNCHING SOON – The fire your TV has been missing.🔥

All you gotta do is 'plug it, make it smart' to experience entertainment like never before.

Get the hint? RT with #PlugItMakeItSmart and tell us your guess.

Xiaomi is teasing “content and gaming go together” meaning users might see gaming-related features or services as well. You will also be able to control your devices at home with the spoken commands using this stick. Considering the brand page, it looks like the Mi TV Stick will stick to the 1080p resolution unlike the competitors. Well, it makes sense considering the majority of users have 1080p TV at their homes. Furthermore, you will find more 1080p content than 4K ones.

The stick will come with Bluetooth remote control for navigation. The stick will make use of a quad-core chipset paired with 1GB RAM and 8GB internal storage for apps. With that said, Xiaomi Mi TV Stick will directly compete with the likes of Amazon Fire TV Stick that comes in both 1080p and 4K resolution.

Considering the product is limited to 1080p playback, Xiaomi Mi TV Stick will fall under the INR 3,000 (i.e. $40) price segment. It makes sense considering the brand will target the budget users and would like to compete with Amazon’s offerings aggressively.

Next ElePods 1 & ElePods TWS on Sale on the Official Website