HMD Global, the company behind Nokia’s revival is quieter than usual in 2020. Of course, the biggest reason here is the COVID-19 pandemic since the company was planning smartphones for Q1 and Q2. However, now the company is targeting at IFA 2020 to bring its big new things for the mid-range and entry-level segments.

During the annual trade fair, the company might unveil the Nokia 2.4. This handset boasts Wolverine codename and might be fairly large with a 6.5-inch display and a 4,500mAh battery. It will be a big improvement over the Nokia 2.3 that ships with a 6.2-inch display with a 4,000mAh battery. Since this is an entry-level phone we’re probably looking at HD+ resolution. The new Nokia 2.4 will carry the MediaTek Helio P22 chipset according to a leaked Geekbench result. 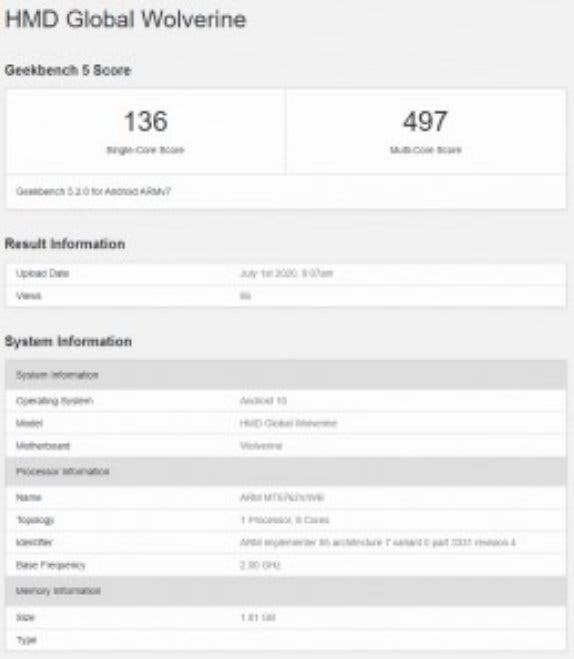 This is a Octa-Core chipset with 8x Cortex-A53 cores clocked at 2.0GHz and a PowerVR Ge8320 GPU. The phone comes with Android 10 OS, but unfortunately, it has just 2GB of RAM. The device will come before Google’s deadline that requires 2GB RAM phones to ship with Android Go. The Nokia 2.4 will come with Android 10 considering its launch is in September. We’re also expecting a variant with 2GB of RAM and 32GB of storage.

The phone has a dual-camera setup with a 13MP main camera and a 2MP depth sensor complete with a LED flash. The handset will come with a Light Purple color among other color options. The selfie snapper will be a 5MP snapper.

The company might also unveil a new mid-range duo in the form of a Nokia 6.3 and Nokia 7.3. Both devices have been delayed due to the COVID-19 and the lockdown policies in several countries. Unfortunately, not much is known about them, except for the fact that the Nokia 7.3 is likely coming with a Snapdragon 765G SoC. Unfortunately, the company might unveil a 4G variant for markets without 5G coverage. Having a 5G phone in a place without coverage may seem like not a good deal, however, this would make the phone more future proof. The Nokia 6.3 will likely come with a Snapdragon 670 or Snapdragon 675 chipsets.

Both smartphones ship with Quad-Cameras on the back all of them with ZEISS optics. Their predecessors, the Nokia 6.2 and 7.2, were very similar, the main difference is that the 7.2 had better chipset and better cameras. We expect these differences to be present again with the Nokia 6.3 and 7.3.

There is a curious device from Nokia coming. It’s the Gamora Plus which paid a visit to the GeekBench database. Instead of Snapdragon or MediaTek solution, this phone was sporting a Unisoc chipset. The chipset is similar to Helio P22, however, it makes use of Eight Cortex-A55 cores and a GE8322 GPU. 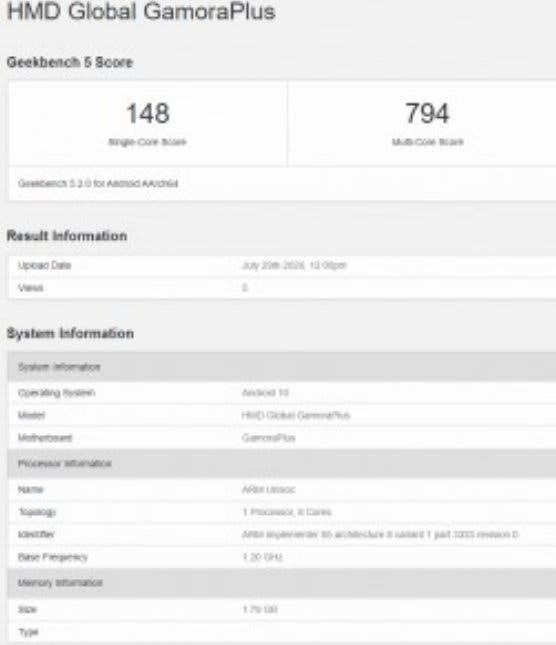 The unit tested on GeekBench had 2GB of RAM. However, a similar model surfaced on TENAA With 3GB of RAM and 32GB storage. Unfortunately, we still have no clue to what number will be given to the Gamora Plus.