The next week will be quite hectic for smartphone enthusiasts, especially Realme fans. On August 3, the company will unveil a new smartphone series with the Realme V5. It’s a 5G mid-range phone that will debut the brand new Mediatek Dimensity 720 SoC and a new design language for Realme smartphones. We’ve seen the device’s design and its key specifications over the past few days. Now, a new leak reveals the price of the new smartphone. It will cost CNY 1,699, which translates to $245 or €205. 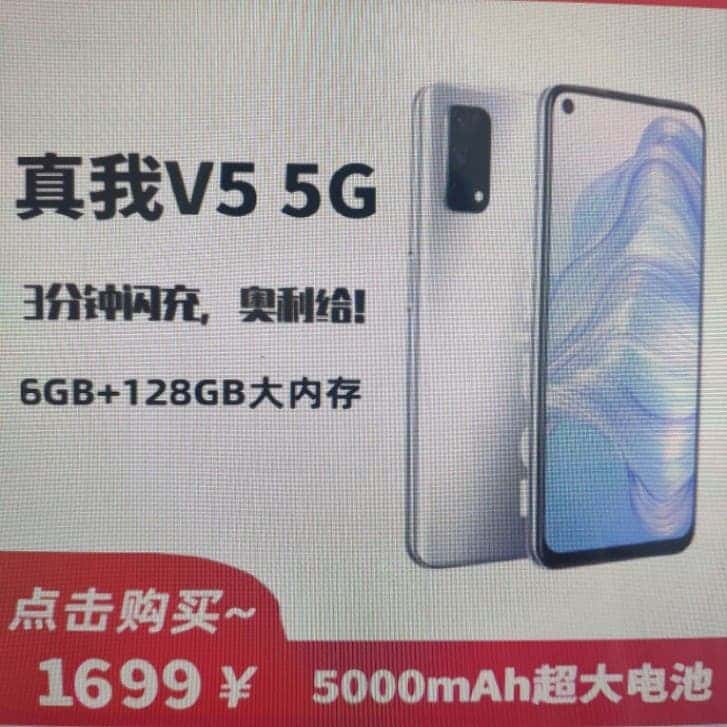 This price applies to the specific variant with 6GB of RAM and 128GB of Internal Storage. Unfortunately, it’s not clear if there will be additional variants for this phone. According to the company’s teaser, the 5,000mAh battery is pretty much confirmed. However, there still no details regarding the type of fast charging that will come with these smartphones. We’re expecting the Dart Charge tech to make a comeback here. For this price point and battery size at least 33W is the ideal.

Meanwhile, a smartphone with model number RMX211 popped out in AnTuTu. The handset scored exactly 301,380 points. This score is pretty much on par with the Dimensity 720 chipset’s performance. However, this score is also in line with the Snapdragon 765G can achieve, although we doubt that Realme will introduce a phone with this chipset at this point. The 5G chipsets from MediaTek already proved that they can provide a better price ratio than Qualcomm’s SD765G. It’s hard to find Snapdragon 765G phones with prices below $300, the easiest one to remember is the Redmi K30i. Most of the OEMs are still selling this chip as a premium SoC due to its 5G capabilities.

Besides its performance and battery, we also expect the Realme V5 to offer powerful camera capabilities. Its Quad-Camera setup sits inside of a square-shaped camera island. It’s the first smartphone from Realme to adopt this design language, which right now can be considered mainstream since a lot of companies are using it. We expect a big focus on Night Mode and Portrait shots. After all, Realme is focusing in the generation Z with this handset.

The device will be released first in China. The time will tell if the V-series will be exclusive to its domestic market or if it will make way to the International markets.