Motorola is gearing up to unveil new smartphones this quarter. The first and most plausible release will be the Motorola Moto G9 Plus which has been surfacing through several leaks recently. However, the company may also release new smartphones for the Moto E series. Recently, a Moto E7 smartphones were spotted on Google Play Console with 2GB of RAM. Now, the Plus variant passed by GeekBench Benchmark with twice this amount. 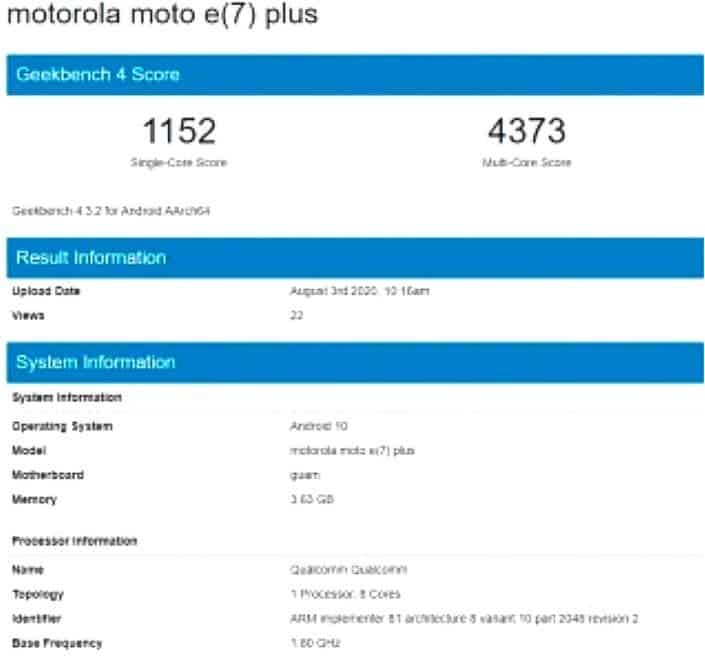 While the Moto E7 boasts the Snapdragon 632 chipset, the E7 Plus is listed with a “Guam” motherboard. This presumably stands for another Snapdragon 6xx chip. We’re not expecting a 7xx chipset on the Moto E7 Plus, since this still is an entry-level smartphone. However, we’re expecting something beyond the vanilla Moto E7 like the Snapdragon 670 or 675. In the worst-case scenario, the Plus model will retain the same chipset, and we will explain why.

The results point out the Snapdragon 632 after all

The Moto E7 Plus passed through GeekBench 4.3 and achieved 1,152 points on the single-core tests and 4,373 on the multi-core department. These results are actually on par with the last year’s Moto G7 that ships with the Snapdragon 632. The results may be a little bit below the standard, however, this could be due to the fact that this is pre-release hardware and software that is not optimized like a final product. The Moto E7 Plus leaked in a couple of hands-on shots in the last month. The leaked images should a dual-camera array complete with a Laser Auto-Focus. The Laser AF certainly is a good add-on for a device of this kind. The rear panel is complete with a Motorola logo that doubles as a fingerprint scanner. The handset has a teardrop notch at the top of its display.

We expect the Moto E7 Plus to be larger than the vanilla Moto E7 that has a 6.2-inch HD+ display. However, the resolution should keep the 720p aspect. The vanilla handset is listed in Canada at CAD 190 which is around $140 or 120 Euros. We can assume that the Moto E7 Plus should sit towards the $150 margin.

Motorola is yet to confirm the arrival of the Moto E7 series. However, we are betting on the release of the Moto E7 family along with the upcoming Moto G9 Plus. The latter was released in October last year. This time, around, it may come a little earlier since leaks are popping out everywhere.

Previous iPhone 12 series may be announced in two stages