Sony’s fifth-generation gaming console, PlayStation 5 will be officially available this fall. This device will have two versions. There will be a model with a built-in optical drive that can read game discs like the PS4. Also, there will be another model without the optical drive and only supports digital games. Otherwise, the two models have the same configuration. They both come with a Zen2 architecture custom CPU and RDNA 2 Micro-architecture GPU.

According to the company, the floating-point speed of the PS5 is 10.28 TFLOPS. This is close to the VEGA64 graphics card and is about ten times faster than the PS4. Although we know that the PlayStation 5 will hit the shelf this fall, there is no official price listing for now.

It is reported that PS5 is expected to be released in the holiday season at the end of this year, and the price is unknown. A new listing of the PS5 in France reveals the price details of this device. Also, there is information on the pre-order date for this device. According to Carrefour, the PS5 without an optical drive will sell for 399 euros ($471). However, the optical drive model will go for 499 euros ($589). According to Carrefour, the pre-order for the PS5 will end on October 3rd. However, we all know that the PS5 will probably not hit the market before November. This puts a question mark on the credence of this information. 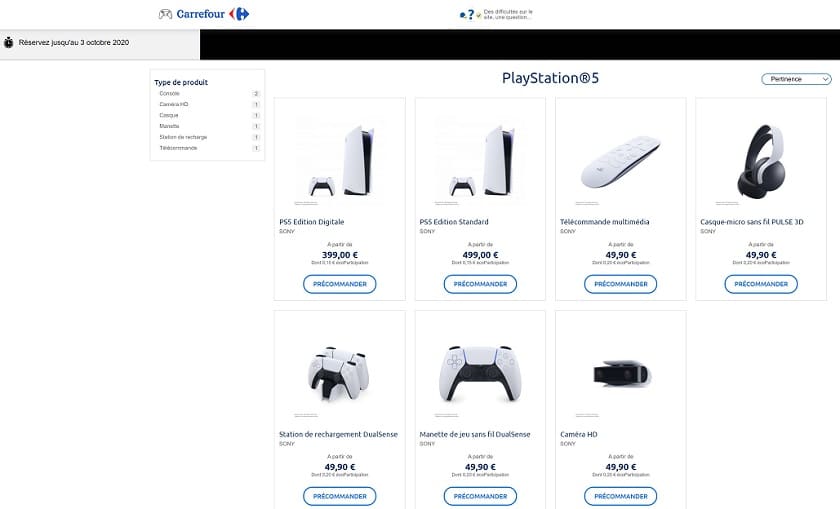 Carrefour has since modified the content of its pages to remove this information. Well, its too late, screenshots are already circulating on the web. The price of the PS5 is in line with previous leaks. However, the price of the accessories and the reservation dates suggest that they are simple placeholders.

The Carrefour leak also shows a 49.9 euros ($59) price tag for multiple PS5 accessories. This includes the Pulse 3D wireless headset, DualSense charging stand, DualSense handles, HD camera, and remote control. Of course, we all know that these devices can not have the same price.

Unfortunately, Carrefour’s website has some sort of restriction to users from some regions. The price on this latest info is probably a place holder. However, if the information is real, then the PS5 is selling at almost the same price as the PS4. In fact, this device costs less than most flagship smartphones in the market.