A new Realme smartphone passed by TUV Rheiland certification with an RMX2170 model number. The handset boasts a 65W fast charger with 6.5A at 10V output. Moreover, it’s a device with a two-cell battery with 2,200mAh rated capacity per cell. In the end, it has a 4,400mAh battery. Apparently, this handset is the Realme X3 Pro, but this still isn’t confirmed.

Interestingly enough, the very same RMX2170 has recently received Wi-Fi Alliance certification with Android 10. It also mentions support for Wi-Fi 5, while modern Snapdragon 865 devices have support for Wi-Fi 6 (ax). If you’re familiar with the Realme X3 Pro, you know that Realme has chosen the Snapdragon 855+ to keep it cost-effective. It’s a more affordable flagship with a chipset that can only be surpassed by this year’s Snapdragon 865 family. Worth noting that the Snapdragon 765G also lacks Wi-Fi 6, so again, we can’t confirm that this is the Realme X3 Pro just yet. 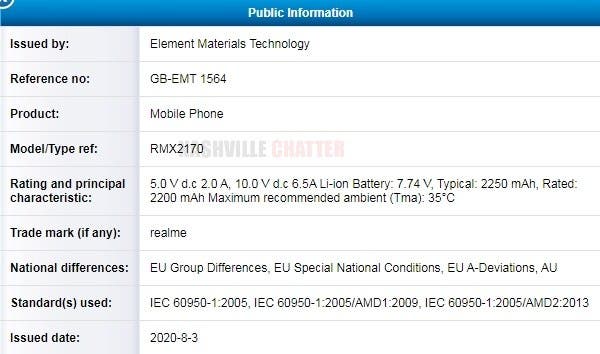 Worth noting that the Realme X3 Pro is an entirely new handset with some differences when compared with the Realme X3 SuperZoom. According to a recently spotted TENAA listing, the handset boasts a 6.5-inch display with a punch-hole cutout located on the top-left corner. The device comes with dimensions of 160.8 x 75.2 x 8.5mm. The listing also confirms Android 10 with a dual-cell battery solution resulting in a 4,400mAh total capacity.

The TENAA listing also revealed the design of the upcoming device. It ships with a rectangular camera module on the back. This array comprises four different sensors accompanied by an LED flash. There’s no fingerprint scanner on the back that suggests the presence of an in-display sensor. In fact, it makes sense since we’re looking at a new flagship offering from Realme. The handset follows the company’s usual button placement.

Although the company recently unveiled the Realme X3 and X3 SuperZoom, we’re still missing a Realme X3 Pro. The flagship model is yet to go official and is likely to replace the Snapdragon 855+ powered Realme X2 Pro that debuted in October last year. For that reason, although the TUV listing reveals only Wi-Fi 5, we don’t see a big point on the Realme X3 Pro coming without the SD865 SoC.

Previous TikTok As Apple of Discord In China - US War