Huawei’s Honor may be quieter than usual due to all the problems caused by the US ban. However, the company is far from giving up the smartphone market and keeps exploring all the possible ways to bypass these restrictions. Although the company has lost access to Google Play Services, it keeps expanding its Huawei Mobile ecosystem to make it a viable option for all users even those outside of China. Now, the sub-brand has signaled that it will keep pace with the global expansion of the brand. Honor just announced that it will be holding an event at IFA Berlin on September 4.

Interestingly enough, Honor is the latest company to confirm a presence at the event. Realme is one of the companies that will be attending to this year’s edition of the tech trade fair. Samsung, one of the biggest and most important companies of IFA, will be absent this year due to related to the COVID-19 pandemic. Worth noting that this year’s edition of IFA Berlin will be adopting a different format. Instead of being open to the public, the event will be closed to journalists. Huawei obviously will also be attending IFA as well. Other companies that already confirmed their presence are TCL and LG. The former may be releasing more than smartphones at the event, while the TCL should unveil new products to further confirm its new strategy as a separate smartphone maker. 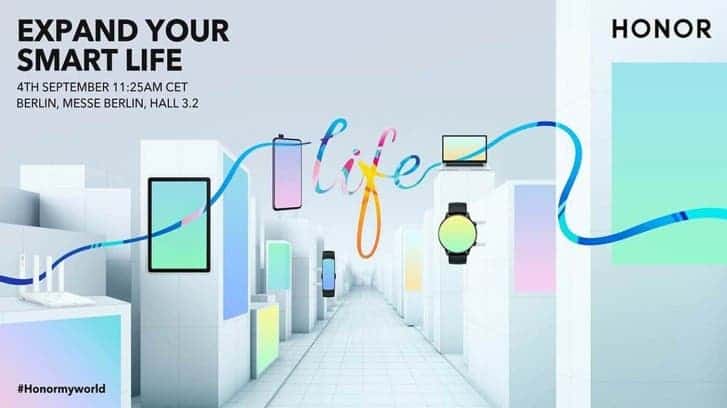 Another important company to attend IFA is Qualcomm. The company should announce a new product portfolio and strategy for Q4 2020. We’re not expecting new chips for 2020, since the Snapdragon 865+ has just debuted.

Getting back to the point, Honor will adopt “Expand Your Smart Life” theme at the event. Therefore, you can expect a wide portfolio of products not only smartphones. Honor’s list of offers includes smart bands, personal computers, tablets, and other wearable products. We believe that Honor along with Huawei will be playing an important role at the event since it will be smaller than usual this year. We’ll be covering all details and releases of the new event, so stay tuned.

Some companies like Samsung will be adopting local online events in September to unveil new products. After all, this proved to be the safest way to announce new products this year plagued by the ongoing pandemic.