The first place is taken by Qualcomm Snapdragon 865. The second place is conquered by MediaTek Dimensity 1000+. Snapdragon 855+ takes third place. While Huawei’s Kirin 990 chipset is fourth on the list. Let’s discuss the top chipsets in detail below. 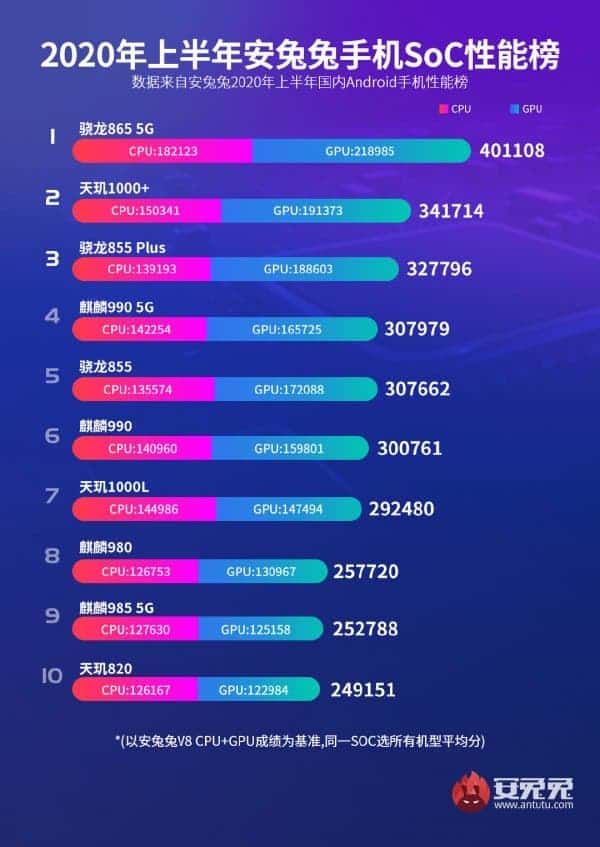 It seemed that MediaTek will fall down, but then the company revealed its top tier SoC series: Dimensity. The Dimensity 1000+ is a flagship-grade chipset that also comes with 5G connectivity support. The chipset are made on the 7nm process, making them highly power efficient. What makes the chipset in power is 4 powerful Arm Cortex-A77 cores, 4 power-efficient Arm Cortex-A55 cores. And for the gamers out there, the chipset comes with nine Arm Mali-G77 GPU cores.

The Snapdragon 855+ is a successor to Snapdragon 855. The plus version was specially made for gamers. The chipset provided 15% faster graphics rendering and an uplift in CPU performance from the standard Snapdragon 855. For power efficiency, it is built on the 7nm process.

Fourth on the list is the Kirin 990. You will find this chipset on high-end Huawei smartphones. It was revealed on September 6th, 2019, and also came with 5G connectivity.  The first phone to get powered by the Kirin 990 was Huawei Mate 30 Pro 5G. The 5G chipset supports up to 2.3 Gbps download and up to 1.25 Gbps upload speed. It also comes with faster LPDDR4X-4266 memory.

Other chipsets who have made their way to Top 10 lists include the Snapdragon 855, and the Kirin 990. Lastly, the list completes with Dimensity 1000L, the Kirin 980, Kirin 985 5G, and the Dimensity 820. While you may see that there is no Exynos chipset on the list, that is because the list only includes domestic SoCs. Domestic means China for AnTuTu and that is the reason why you see so many Dimensity chipsets even though they never made their way to global markets.

How to transfer everything from old Android phone to iPhone 14