According to the previous iQOO’s official announcement, the new iQOO 5 series will officially hit the market at 14:30 on August 17. The company said it is a smartphone with a ‘120-point super score’. The highlight is the first launch of a 120W fast charging technology. As the release time approaches, there is a steady stream of selling points that have been officially confirmed. Recently, the iQOO brand officially released a trailer for the phone, and its appearance information has finally been made public.

The latest official iQOO promo video shows that the whole new hyperboloidal iQOO 5 will use a flexible screen design. Also, the screen will have a 120Hz refresh rate, while the resolution is FHD+. It is worth noting that this is the first hyperbolic flexible screen smartphone under iQOO. It has passed the SGS screen certification, and the harmful blue light is less than 7.5%.

In other aspects, according to previously exposed news, the new iQOO 5 uses a 120Hz AMOLED hyperboloid aperture full screen. Under the hood, we will find a Qualcomm Snapdragon 865 flagship platform, which supports SA and NSA dual-mode 5G. Also, the phone will use an LPDDR5 memory and UFS 3.1 native storage. It has a built-in 4000mAh battery. The standard version supports 55W flash charging, and the top version supports 120W flash charging.

It can charge 100% of electricity in 15 minutes. It is the iQOO mobile phone with the fastest charging speed and highest charging power so far. Regarding step-down, iQOO introduces two key links: complete the voltage-current conversion from 20V/6A to 10V/12A through a double half-voltage charge pump; then upgrade the traditional single battery to a dual-cell battery pack, and step-down. The principle converts 10V/12A into (5V/12A)×2 and finally achieves 100% charging in 15 minutes.

When it comes to fast charging solutions, Chinese smartphone manufacturing giants are doing quite well. In this regard, Oppo is well ahead with its 65W fast charging. However, Oppo itself now has up to 125W fast charging. In addition, the likes of Xiaomi, Vivo, and a few others also have fast charges that exceed 100W. 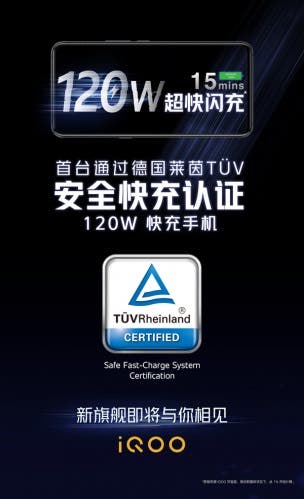