After launching C11 and C15 in the last couple of months, Realme is now bringing more smartphones to its C-lineup in the Indian market. We’re looking at two new smartphones namely Realme C12 and Realme C15. The Chinese smartphone maker has now started sending out the invites to media. It looks like both the devices will see their official launch on August 18. 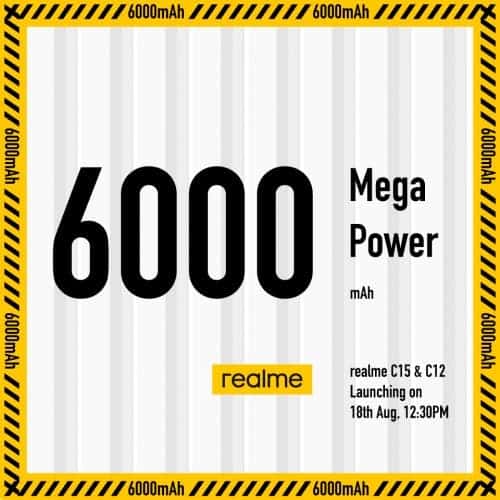 As per the sent press note, the digital launch will take place on August 18 at 12:30 PM IST. The invite clearly mentions the two devices and also teases a massive 6,000 mAh battery capacity. This means that both the smartphones will arrive with the same gigantic battery packed inside. Coming to the launch event, Realme will be streaming it on its YouTube channel along with on Facebook and Twitter accounts as well.

For those who’re unaware, Realme C15 is already official in other markets while we will be hearing about the Realme C12 for the first time.

The smartphone recently appeared on GeekBench listing. As per the listing, the phone will arrive with MediaTek Helio P35 chipset paired with 3GB of RAM running on Android 10 operating system. Sadly, the rest of the aspects remain a mystery. We should expect more information surfacing online in the coming days.

Realme C15 features a 6.5-inch IPS LCD panel with a resolution of 720 x  1560 pixels and 270 PPI pixel density. Under the hood, the device runs on Helio G35 chipset paired with up to 4GB RAM and 64GB onboard memory. For optics, there is a quad-camera module on the back. The setup consists of a 13MP primary sensor, an 8MP ultrawide lens, and two 2MP sensors. For selfies, there is a single 8MP front snapper housed inside the waterdrop notch.

Powered by 6,000 mAh battery, the phone makes use of 18W fast charging. Other specifications include Bluetooth 5.0, WiFi, audio jack, and USB 2.0 for charging.