According to recent reports, the U.S. smartphone market is now recovering after the coronavirus lockdown, many thanks to Chinese manufacturers. The report shows that the US smartphone market recovered strongly in the second quarter of 2020. Its shipments hit 31.9 million units, an increase of 11% from the previous quarter. Apple and Samsung still lead the way in smartphone shipments. Nevertheless, the latest data from Canalys shows that 7 out of every 10 devices sold in the US market have links to China. The report adds “around 70% of smartphones shipped in the US in Q2 2020 were made in China, up from 60% the quarter before”. 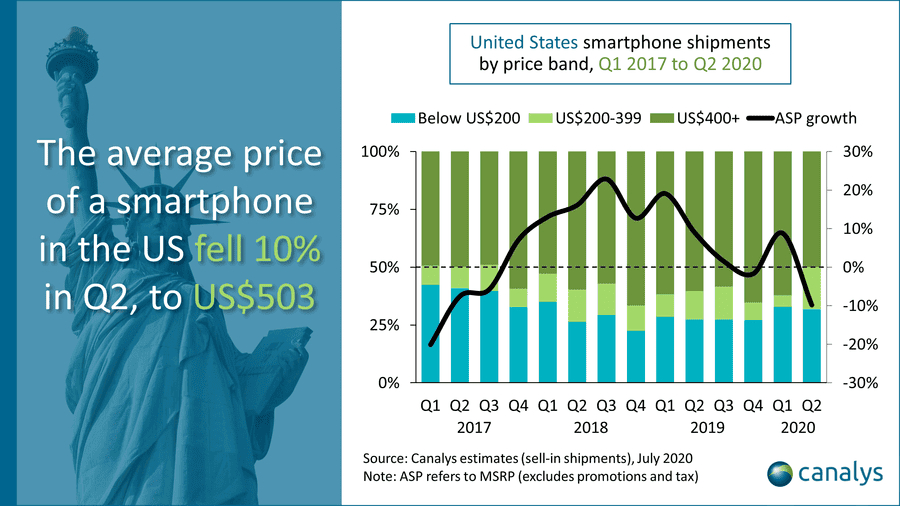 In the second quarter, US smartphone market shipments fell by 5% year-on-year. Apple and Samsung collectively account for 70.3% of the total market share. During the same period, they sold 15 million and 7.4 million smartphones respectively. In addition, South Korean electronics brand, LG, and Lenovo rank third and fourth respectively. 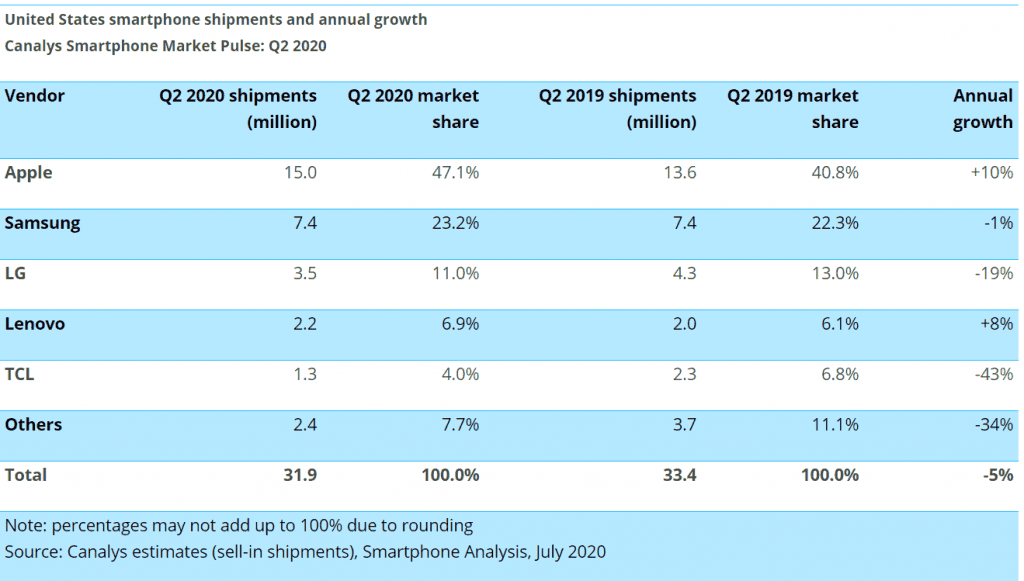 Canalys said in the report: “The Chinese factory resumed operations at the end of March, and retail stores reopened in May and June. These are key factors for the continued growth of the market”.

Although the overall shipment of smartphones in the US market is increasing, consumers are turning to cheap and low-end devices. According to Canalys’ data, Apple’s market share in the second quarter soared, thanks to iPhone 11 and iPhone SE.

Canalys analyst, Vincent Thielke, said: “As the coronavirus pandemic forced consumers to stay at home, 5G adoption in the US failed to take off. Store closures and virus fears limited interaction with demonstration models, tight consumer budgets further constrained spending power, and with scarce 5G network coverage in American suburbia, consumers saw plenty of reasons to buy a 4G device instead. Despite the lackluster 5G roll-out so far, strong carrier marketing in the coming quarters will be instrumental in catalyzing a multi-year transition period from LTE to 5G.”

However, a report from Strategy Analytics claims that the U.S. had 3.4 million 5G phones in Q1 2020. This accounts for 12% of the total smartphone shipments during the same period. According to Strategy Analytics, the Samsung Galaxy S20 5G is the best-selling 5G smartphone model in the U.S. It has a 40% market share, which is impressive.

At the same time, China released the latest report showing that in the first seven months of 2020, 5G mobile phone shipments hit 77.5 million units, accounting for 45% of smartphone shipments in the same period. Out of the 197 new smartphones that hit the market from January to July, 119 were 5G phones.

Analysts believe that the proportion of 5G mobile phones in total smartphone shipments is increasing significantly. This reflects the Chinese government’s efforts to build a new digital infrastructure. This includes the next-generation wireless networks and data centers.