There have been growing tensions between the U.S. and China. Unfortunately, technology is a core area and this trade war is extending to the technology industry. Since last year, the U.S. has been banning Chinese companies notably Huawei and ZTE. Now, all is set for the American government to ban WeChat and TikTok. While the TikTok ban is simple and straight forward, WeChat ban has a lot of implications. Presently, WeChat is one of the few viable financial platforms between the U.S. and China. If you take away WeChat, you will technically be “killing” many American businesses in China.

According to a report by China Daily, citing a report from the US Wall Street Journal, more than a dozen US companies joined forces to boycott the US government’s plan to restrict commercial transactions involving Tencent’s WeChat. According to these companies, this will weaken the competitiveness of companies in China, the world’s second-largest economy. 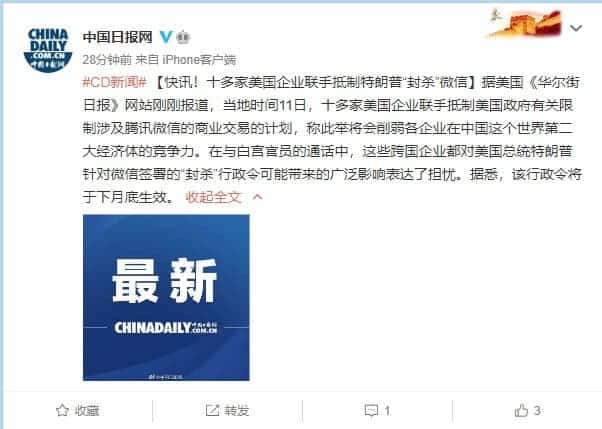 In conversations with White House officials, these multinational companies all expressed concern about the possible widespread impact of the “blocking” executive order signed by US President Trump on WeChat. According to reports, the executive order will take effect at the end of next month.

According to Tencent, the executive order of U.S. President Trump will be inactive in China. Thus, the ban will have an insignificant impact on its business. There is a huge difference between WeChat in China and outside China. In the latest financial report performance statement, Tencent executives highlighted the difference between the WeChat service outside China and the similar application WeChat in China. Trump’s executive order clearly mentions the former.

As of now, we do not know how these companies plan to boycott the executive ban. In addition, there is no information on the companies forming the alliance. Nevertheless, this will obviously be a hard hurdle for them to scale. The U.S. government is quite “stubborn” when it comes to issues with China. However, there is a possibility that President Trump may reconsider his decision to ban the “all-round” company.

Though PayPal Officially Entering Chinese Market, It Won’t Compete With AliPay and WeChat

The U.S. Court of Appeals again prevents the government from banning WeChat