Huawei will officially release the Huawei Mate 40 series in two months. In recent times, there have been a lot of speculations regarding the upcoming Mate 40 series. This series will be Huawei’s last flagship for this year. In fact, it will be the company’s last flagship for a foreseeable future. This is as a result of the ban on Huawei by the American government. According to a recent report, the Huawei Mate 40 will use Huawei’s liquid lens camera technology. 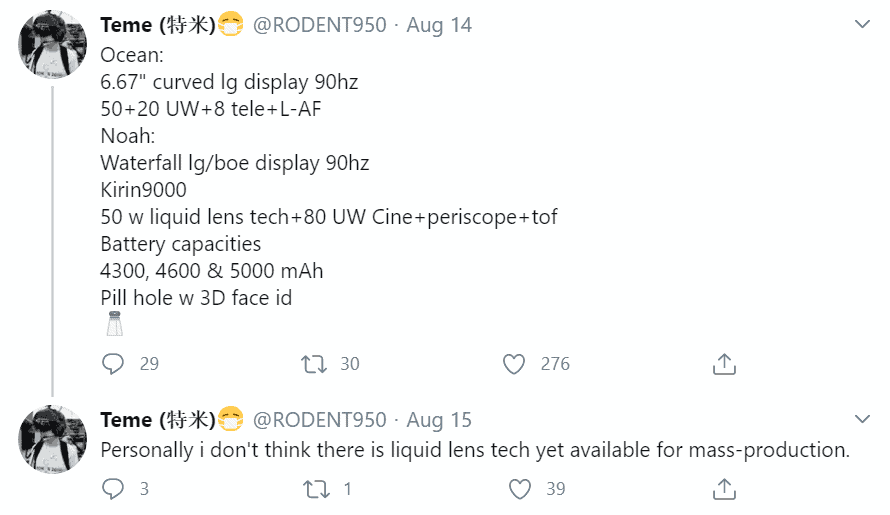 According to the tweet from @RODENT950, the liquid lens camera technology is not yet available for mass production. A patent filing a few months ago shows that Huawei’s liquid camera technology can achieve faster autofocus and better stability. This is about all we know regarding this technology.

Huawei Mate 40 series will not be widely available

According to Huawei’s consumer business CEO, Yu Chengdong, Huawei’s consumer business sales revenue in the first half of the year hit 255.8 billion yuan ($36.8 billion). In addition, the company shipped about 105 million units. He also revealed that the Huawei Mate 40 series will use the Kirin 9000 chip. This will be the last generation of Kirin flagship chips for now. This is due to the recent ban on Huawei by the U.S. government. Yu Chengdong said that Kirin’s high-end chips are out-of-stock and there will be no reproduction anytime soon.
Source/VIA :
RODENT950

Next Nokia 5.3 will reach India on August 25, Nokia 5310 now available in the country