After many rumors and leaks, OnePlus finally introduced the OnePlus Nord in the last month with mid-range specifications. It’s the company’s first mid-range phone in the recent years, but apparently, will not be the only one coming 2020. A few weeks before the release of the first OnePlus Nord, we saw an OnePlus Nord running in GeekBench with a Snapdragon 690 chipset. This is the first Qualcomm chipset in the 6xx series to come with an integrated 5G modem. After the Nord release, reports emerged indicating that the Nord is not a single device, but a smartphone series.

The OnePlus Nord with Snapdragon 765G launched in several markets. However, OnePlus decided to skip the North American market with the new mid-range phone. According to rumors, the company will release the Snapdragon 690-powered OnePlus Nord in the United States and it will be cheaper than the SD765G variant. A new interesting detail emerged today and we can see that the new OnePlus Nord is slowly taking form. 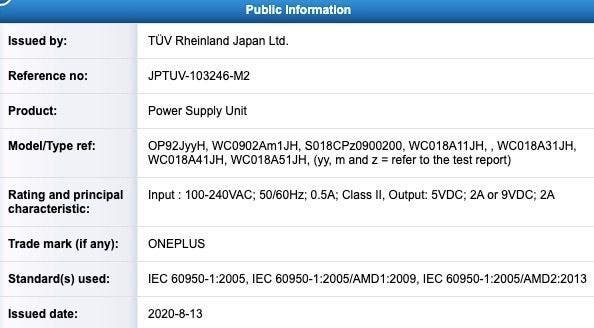 TUV Rheinland certified a new OnePlus charger with a maximum output of 9 Volts at 2 Amps. In other words, an 18 Watts charger. This number is quite common among smartphones in the mid-range segment. It’s also very common for QuickCharge and USB Power Delivery chargers. However, it’s the first time we see this number in an OnePlus-branded charger. Until now, the minimum amount the company had offered was a 20W charger. Apparently the new charger will not carry the Warp/Dash branding.

An OnePlus device with a “mainstream” 18W charging tech

Interestingly enough, the OnePlus Nord supports Warp Charge 30T. We are sure that this is a feature that will be absent in a more affordable phone with Snapdragon 690. It will be the first OnePlus phone to not use the Warp / Dash charge technology. However, this is something that some costumers will definitively exchange for having a cheaper OnePlus phone with 5G. After all, the company has a lot of pros besides its charging technologies.

In counterpart to that upcoming mid-range phone, recent reports state that the OnePlus 8T family will go up to 65W. As sister companies, Oppo and OnePlus usually give similar steps. Oppo recently debuted the 65W standard within its Reno 4 family. The technology will mature in the coming months and we’ll probably see it in the Q4 OnePlus 8T flagships.

Previous Google Hinted: If There Is No License, Android Updates of Old Huawei Smartphones May Stop