The laptop market grew 27% year over year in the second quarter of this year, according to the latest report released by Strategy Analytics.

Strategy Analytics: Lenovo and HP own half of the laptop market

The rise in demand is due to the COVID-19 pandemic. It has forced many users to shift to telecommuting and homeschooling. The two leading companies in this segment, Lenovo and HP, had nearly 50% market share in the second quarter of 2020.

According to the latest survey, Lenovo accounted for 25% of the market, while HP’s market share was 24.8%. Brands such as Dell, Apple and Acer followed, ranking third, fourth and fifth in terms of global notebook shipments. Their market shares are 15.6%, 8.5% and 6.7% respectively.

The publishers of the study report that today laptops are purchased for work, study and play. Separately, there is a great demand for Chromebooks. 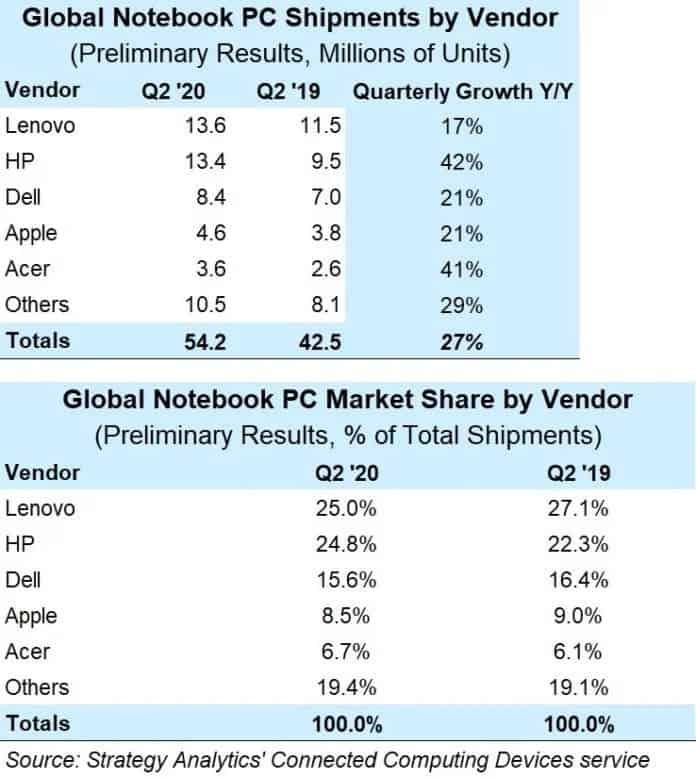 Toshiba Corporation recently announced that it will hold Dynabook Inc. Sharp got 19.9% ​​of the issued shares later. After the completion of the relevant transaction, Dynabook will become a wholly-owned subsidiary of Sharp. Prior to this, Toshiba and Sharp signed the terms of a stock purchase agreement in June 2018, and Toshiba allocated 80.1% of its notebook business (Toshiba Client Solutions Co., Ltd, TCS for short, which was Toshiba’s wholly-owned assets). Sharp got the issued shares, and the deal was over in October 2018. So now, we can say Toshiba officially leaves the notebook market.

After the completion of the transaction between Toshiba and Sharp in 2018, TCS changed its name to Dynabook in January 2019. According to the stock transfer agreement at the time, Sharp exercised its subscription rights to the remaining outstanding shares of Dynabook held by Toshiba on June 30, 2020, and Toshiba has completed its transfer procedures.

Toshiba brand launched consumer laptop products as early as 1985. The first laptop product was T1100 (also the world’s first laptop). It came with a built-in rechargeable battery, an LCD monitor, and Microsoft-based BIOS, based on Intel’s 80C88 processing. It had 256Kb memory and 640×200 pixel screen. Before brands such as Asus, Dell, Apple, Lenovo, and Hewlett-Packard entered the notebook computer market, the company ruled this niche. Later, after the aforementioned brands entered the market, users still recognized Toshiba for its Satellite series products. Subsequently, Toshiba also launched the Portege series of ultrabook products.

However, with other brands launching thinner and more powerful notebook computers, coupled with the shrinking of the personal computer market, Toshiba could not meet the needs of consumers and eventually became a less popular brand in the notebook market.

Previous Samsung has spent $8.9 billion on research and development in 6 months

Next Ulefone Armor 8 still in global presales only for $139.99