Yesterday, we started hearing about the fact that Realme is planning to launch yet another smartphone in its homeland i.e. China. As expected, the Chinese smartphone maker has now revealed key information on the upcoming smartphone dubbed Realme X7. Realme posted a teaser image on its official Weibo social channel.

According to the teaser, the upcoming Realme X7 lineup will see its official unveiling on September 1 in China. The official launch event will take place at around 2 PM local time. Apart from just revealing the launch timeline, the poster also mentions some key specs of the device. We’re looking at the 5G connectivity along with a high-res 120Hz AMOLED display panel. 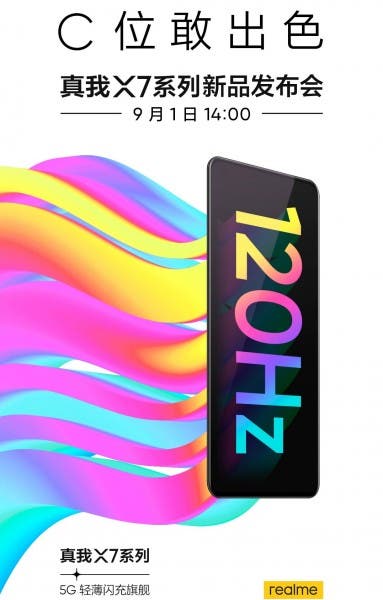 It is worth noting that the upcoming Realme X7 will be the first one to offer 5G support. Furthermore, the Weibo post explicitly mentions X7 Pro but we are also expecting the vanilla variant. Lastly, the poster also consists of a render image but it doesn’t really reveal any concrete information. Although it seems to feature slim bezels, the promotional graphics should be taken with a pinch of salt.

Since Realme X7 is going to be a flagship lineup, we should see a powerful flagship chipset packed inside. Last month, Realme unveiled its massive 125W UltraDART fast charging. It would be interesting to see whether this charging solution is going to be a part of the new lineup.

With that said, we should expect more information coming forward in the coming days or weeks.

The smartphone maker recently launched its budget C12 and C15 smartphone in the Indian market. That’s not it. The company is also working on a new Realme 8 series which reportedly will arrive with large batteries and fast charging capabilities. We’re looking at 65W charging capabilities. Earlier today, the smartphone maker also launched its new wired earphones dubbed Realme Buds Classic in the Indian market. It arrives with a price tag of INR 399 (i.e. $5).