It looks Oppo is now bringing two more devices dubbed Oppo F17 and F17 Pro in the Indian market. With these two phones, the Chinese smartphone maker will be expanding its F series of lineups in the country. The recently leaked promo poster has now revealed that the device will soon make its way to the country. In fact, we can expect the series to launch as soon as next month. 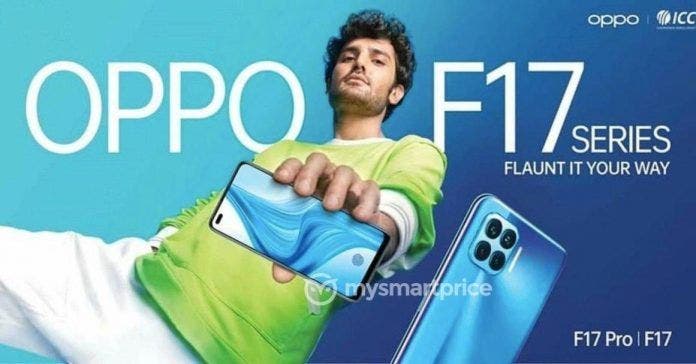 This report comes courtesy of MySmartPrice. Well, it looks like Oppo F17 Pro and Oppo F17 will arrive with a similar design. As you can see, it features a dual punch-hole cutout for housing the selfie camera sensors. Furthermore, we’re looking at an in-display fingerprint sensor underneath the AMOLED panel. The previous-gen F15, on the other hand, comes with a waterdrop notch.

On the back, the smartphone comes with a quad rear camera module while the LED flash sits right next to it. It is still unclear whether the device will feature 48MP or 64MP primary sensor. You can see a sizeable camera bump in the promo poster as well. It is also worth noting that the poster doesn’t explicitly mention the launch timeline. Considering we now have a leaked poster, it makes sense to consider that the device is indeed inching closer towards the official launch.

Considering previous rumors and leaks, we can expect a 4,000 mAh battery packed inside with VOOC charging support.  The smartphone maker has already confirmed that the Pro version will be 7.84-inch thick, weighing just 164 grams. With that said, we should be hearing more about the device in the coming weeks.

Other devices Oppo working on!

Oppo recently launched its budget smartphone dubbed Oppo A53 in the Indonesian market. The smartphone comes packed with Snapdragon 460 chipset. It also comes with a 90Hz refresh rate. The Chinese company is also working on a Reno 4 Z 5G smartphone which appears to be a rebranded Oppo A92s after all.

Previous MediaTek has a huge chip stock for Huawei - what happens to it now?

Next Stylish accessories for your Airpods Pro from Lululook