Earlier this month, Samsung took the wraps off its new Galaxy Note 20 series with a vanilla and less appealing Note 20, and a true 2020 flagship in the form of Galaxy Note 20 Ultra. With the new smartphones, the company introduced the One UI 2.5 software update bringing a bunch of new features and smart Note apps to improve the S-Pen usability. The company even improved the latency of the Bluetooth stylus in a way that it will resemble the feeling of using a pen and paper.

The Note 20 may be a monster in hardware, however, the S-Pen plays a major role in this smartphone since the early days of Note lineup. Note 20 isn’t an exception. The phone obviously has a slot that fits the S-Pen when you’re not using it. In the same way, the S-Pen will always be sitting inside this hole and you can take it out conveniently. However, if by any chance you lose it or even break it, Samsung is getting you covered. Well, as long as you have $39.99 to pay for a S-Pen replacement. 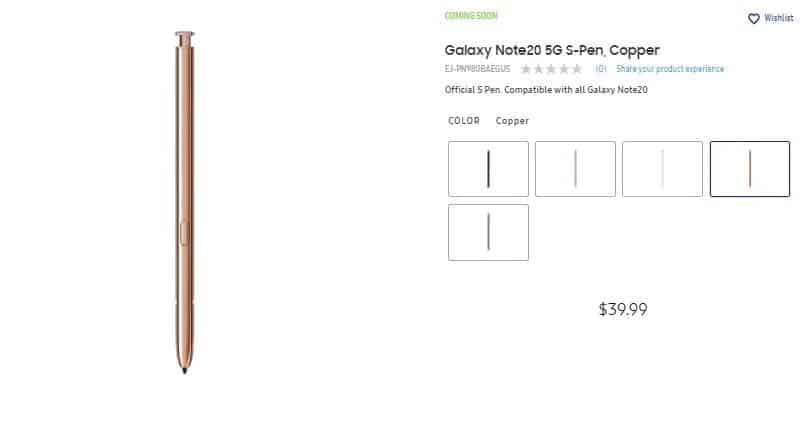 The Galaxy Note 20 is available in multiple color options. In the same way, you’ll be able to purchase a separate S-Pen in the same color as your device. The S-Pen is compatible with all variants of the Note 20 family. In other words, the accessory is cross-compatible with both Note 20 and Note 20 Ultra. We know that it’s not cheap for an overall stylus, but the S-Pen isn’t an ordinary stylus. Moreover, smartphones are quite expensive, so the price follows the same standard.

The Note 20 Stylus connects via Bluetooth and charges automatically when you put it back in its slot. It has support for 4,096 levels of pressure and can perform a number of off-screen functions such as music playback control, remote for the camera, and as an air remote. Interestingly enough, the last year’s S-Pen for the Galaxy Note 10 is sold at $10 less than the Note 20 accessory. The replacement S Pen can be acquired on the official website, however, it’s listed as coming soon.