Two years ago, ZTE suffered from sanctions imposed by the US government. The smartphone maker almost closed its door, but a few months after the decision, the US government decided to bring some relief asking ZTE to comply with some requirements. One year after, ZTE released the first 5G smartphone in China in the form of ZTE Axon 10 Pro 5G. This year, the company is ready to unveil a new game-changer in the form of ZTE Axon 20 5G. This will be the world’s first smartphone to feature a in-display camera selfie. Instead of a punch-hole, or even pop-up mechanism, ZTE managed to place a in-display camera and is satisfied with its quality. The President of ZTE Mobile has been teasing us in the past few days. Now, the published a new image that shows the color variants the new phone will be available in. 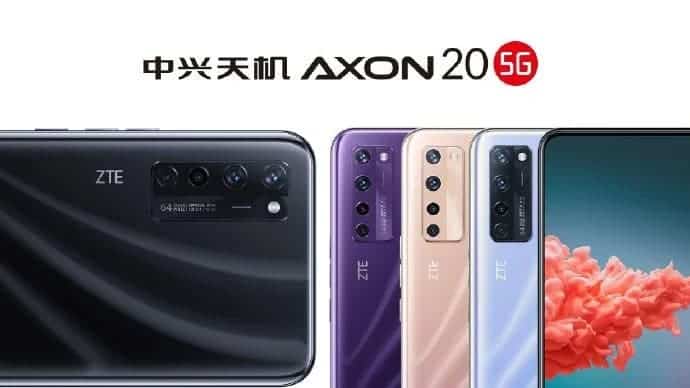 A few days ago, a teaser photo revealed the black color option for the new handset. Now, Ni Fei has just revealed three additional colors. The world’s first commercially available in-display camera smartphone will come in Purple, Gold, and Sky Blue color options. All four color variants have light streaks that run across their backs. The Executive also created a poll asking ZTE fans to choose the official names for the colorways. The option with the highest number of votes will be chosen. 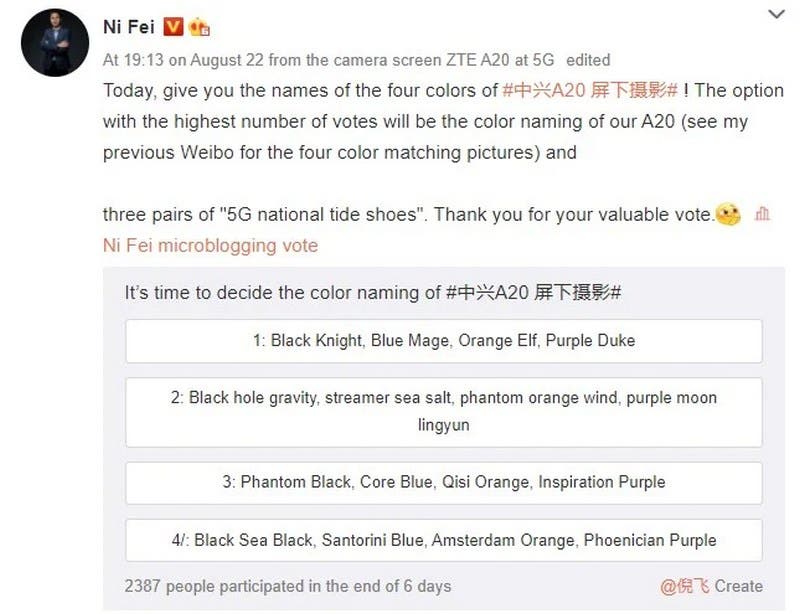 So in your opinion what are the best names for the upcoming handset? The poll will be available for the next 6 days, ending a few days before the phone’s release on September 1. Under the hood, the phone will boast Qualcomm’s Snapdragon 765G Mobile Platform. That’s not a great thing to hear for users waiting for some flagship performance. However, we believe that the company could not simply fit the new technology with a flagship chipset and make the price acceptable. So instead, it’s focusing on the premium mid-range segment. We just need to know what pricing point it will adopt. Apart from the chipset, we have up to 12GB of RAM and up to 256GB of Internal Storage.

The camera department is getting covered with a 64MP + 8MP + 2MP + 2MP combo. The In-display selfie camera is a 32MP snapper. The phone will draw power from a 4,120mAh battery with fast-charging support. The phone comes with Android 10 straight out of the box.

Previous Galaxy Note 20 S-Pen replacement will be sold at $39.99

Next We finally have leaked ZenFone 7 images to look at, coming with three cameras