Gionee was one of the most traditional Chinese companies in the smartphone market. A few years ago the company was playing along with the giants and was one of the first Chinese firms to bet in the Indian phenomenon. However, the company failed to keep up with other giants like Xiaomi, Oppo, and Huawei. After a period of hiatus, Gionee decided that this year will be marked by its comeback. After launching some mid-range phones, the company is now preparing its return to the Indian market with a device dubbed Gionee Max.

The new Gionee Max will pack a big battery and will come with an under INR 6,000 price tag. This is just around $80, which makes it a very competitive low end. Moreover, the previous poster inviting for the August 25 reveal suggested a mainstream design with a waterdrop notch display. The only problem until now was the lack of in-depth details regarding the specifications of the upcoming device. This changes today as the company has uploaded a banner on its official Twitter account to reveal the phone’s design. The promo page on Flipkart has been updated as well. Now it includes some key specifications of the upcoming device.

As the previous poster suggested, the Gionee Max will sport a big 6.1-inch display with a waterdrop notch sitting at the top. Unfortunately, the camera actual resolution remains a mystery. But we believe that its resolution will be between 5MP and 8MP. The display has a good old 2.5D effect and the bezels are on par with low-end offerings. The rear part of the handset is home for a Dual-Camera setup comprising two vertically aligned units in the top-left corner. Once again, no details about this camera setup. We believe that the main sensor should be a 13MP primary camera while the second unit may be a 2MP depth sensor. 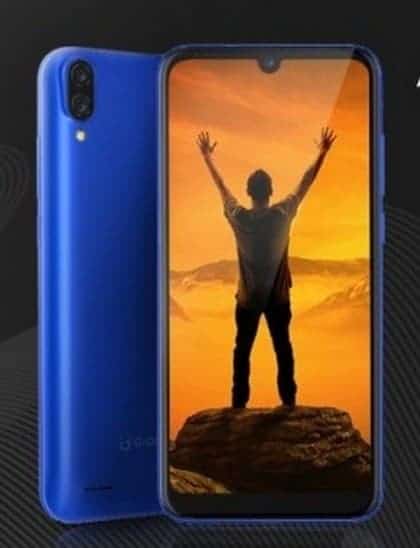 Unfortunately, the company didn’t disclose details about the chipset giving power to Max. Considering the affordability factor, it probably uses a MediaTek chipset, perhaps the Helio P22. The chipset is coupled with 2GB of RAM and 32GB of expandable storage. The phone draws power from a 5,000mAh battery which is excellent. Unfortunately, it comes packed with a micro-USB port. So despite the big battery, users will need to deal with the 10W charging limit.

As aforementioned, the remaining details remain a mystery. Thankfully, we don’t need to wait much longer, since the device is dropping in India on Tuesday.