The Samsung Galaxy Z Fold2 launched at the beginning of the month is probably one of the most wanted devices on the planet, yet nobody is able to purchase one as there’s still no official pricing nor availability. The situation could change soon though as two of the cases for the foldable appear on Samsung’s official Bulgarian website.

The two cases we can see in the images above come with the names: Leather Cover and Aramid Standing Cover. Clearly the first is a more ordinary case made from leather which will be available in three colors: black, brown and green. Out of these three, the brown one goes probably best with the smartphone in Mystic Bronze. Meanwhile the black and green options will suit the Black Galaxy Z Fold2. Either way, inside each case we find a soft microfiber texture; you really don’t want to scratch an over $2000 phone.

As for the other case called the Aramid Standing Cover. This one comes with an integrated kick stand so that you can easily watch content with the foldable standing up. Here colors are more scarce, indeed we only have it available in black.

News site GSMArena points out that neither case offers protection for the front half of the phone and that is true. Though we probably just have to wait a little longer to see some additional original cases for the device.

Lets quickly remind you that the Samsung Galaxy Z Fold2 features a revamped display compared to the first generation. With the front 4.6-inch display that has been replaced by a 6.2-inch punch-hole panel. Meanwhile at the back we find the new Samsung camera look we’ve seen on the Note 20 series.

Moving onto the tablet side, the Z Fold 2 features a beautiful 7.7-inch AMOLED display with a resolution of 2213×1689 pixels and a 120Hz refresh rate. This means it is 0.4 inches bigger than its predecessor. But what’s probably the most important upgrade is the abdication of the massive notch in the upper right corner. In its place we now have a quite small punch-hole camera for selfies. Definitely a big step up in terms of design. 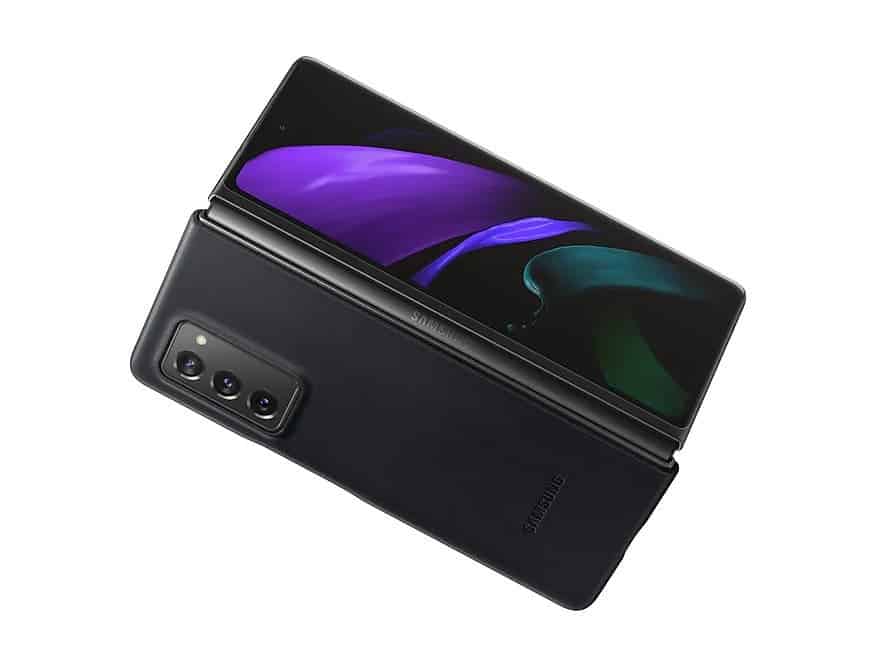 As far as performance is concerned, the Z Fold2 will be powered by a Qualcomm Snapdragon 865+; which is basically an overclocked Snapdragon 865. Along with it we’ll find a maximum of 12GB of LPDDR5 RAM and up to 256GB of internal storage of the UFS 3.1 type.

Previous Galaxy S9 and Note 9 to surprisingly receive the One UI 2.5 update!

Next Gionee Max key specifications and design surface ahead of launch