The smartphone industry has been consistently developing and the rate of development in recent times is rapid. Back in the day, phones were minute devices with a small display. We can not say the same of today’s smartphones. Apple’s iPhones have come a long way since Steve Jobs unveiled the maiden iPhone on Jan. 9, 2007. After that, we saw the commercialization of the 3G network. To this end, Apple skipped the iPhone 1 and released the iPhone 3G in 2008. In June 2009, the company announced the iPhone 3GS. This article looks at an Apple “ten years challenge”. What did we have in 2009 and what did we get in 2019? 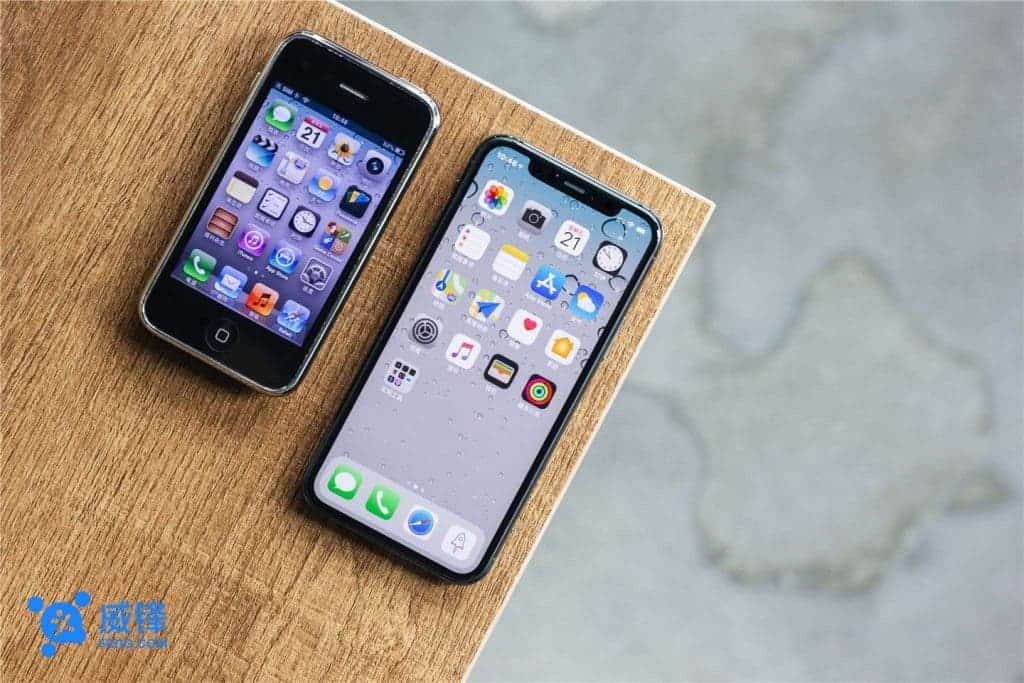 Even in third world countries where you find the oldest iPhones, iPhone 6 is probably the oldest active iPhone you can find. So, during a cleanup, a close ally stumbled on iPhone 3GS from the corner of the drawer a few days ago. After charging the battery, the familiar Apple LOGO turned on. We got to hear the long-lost “click” unlocking sound.  This smartphone is a complete history, but here we are with an active iPhone 3GS.

The iPhone 3GS was a hit back in the day because it is the first iPhone to use a 32GB memory. With the introduction of Apple Store with the iPhone 3 a year earlier, it was clear that 16GB will not cut it. Even in China, iPhone 3GS sales were massive. On Oct 31st, 2009, the first official sales of this smartphone held at Apple Store in Sanlitun, Beijing. There was a total shutdown that day with a host of people trying to buy this device.

Ten years later, the iPhone 11 series launched by Apple last year has become an “arcade,”. The hardware configuration and software functions of both smartphones are a world apart. If two iPhones separated by ten years are put together, perhaps we can more clearly see the progress of the iPhone over the past ten years.

The iPhone 3GS uses a 3.5-inch multi-touch screen with a resolution of 480 × 320. With a compact and sleek body design, there is no pressure on the one-hand operation. The iPhone 11 Pro, on the other hand, can boast of a 5.8-inch display. The resolution is 1125 x 2436 pixels which is a massive increase from ten years ago. While Apple increased the size of the display, the one-hand operation on the iPhone 11 Pro is still cool. 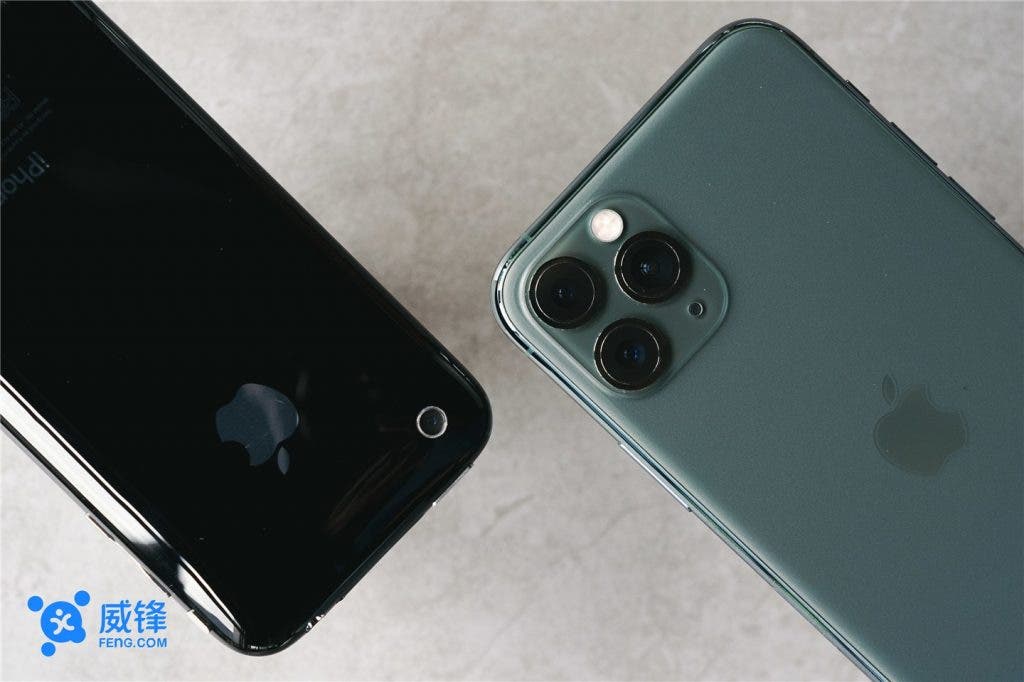 Of course, there is another huge improvement in the iPhone 11, the body material. While the iPhone 3GS manages a rough-texture plastic body, the iPhone 11 Pro uses a glass body + stainless steel middle frame design. No doubt, it is easier to operate the iPhone 3GS with one hand due to its small size. However, the texture and operability of the entire iPhone 11 Pro is a huge leap from 10 years earlier.

Looking at the display of the iPhone 3GS, you can see that massive ugly bezel on the top and bottom. iPhone 11 Pro comes with a massive improvement by using a notch display. Furthermore, the bottom bezel is as thin as the sides, another plus. Looking at the size bezels, it appears that ten years did not change much. There is a difference (but not significant) in the thinness of the side bezel in both devices.

The first-generation iPhone (2G network) and the second-generation iPhone 3G uses a 1.2MP camera. However, the iPhone 3GS comes with an upgrade, it uses a 3.2MP camera from OmniVision. It also adds video shooting and auto-focus functions. Ten years later, the iPhone 11 Pro still uses these features, not much improvement if you ask me. However, let’s look at some image samples

It can be seen that even in a well-lit scene, the look and feel of the photos taken by the iPhone 3GS are still full of “age”. The low pixels, lack of HDR, and other congenital defects are clear to see. Furthermore, there are often shortcomings in the highlights of its images. The details are not clear and in the dark, it is completely lost.

In contrast, the iPhone 11 Pro on the right, thanks to hardware advantages such as higher pixels, optical image stabilization, and software optimizations such as smart HDR and AI, the overall look and feel of the photos is even better than some entry-level SLR/card cameras.

In low light conditions, the image quality of the iPhone 3GS will quickly collapse, accompanied by a lot of noise. With the iPhone 3GS, forget about taking a picture in the dark because what is waiting for you will be an almost black photo. After all, the iPhone 3GS does not support the so-called “night mode”, and there is no flash fill light. What can be photographed at night depends entirely on “God’s Will.”

The upper and lower limits of the iPhone 11 Pro’s recording capabilities are far higher. Even in scenes with almost no natural light sources, iPhone 11 Pro relies on the “night mode” software optimization. It can also achieve recording, no matter what. Furthermore, there is a rear flash that can act as a supplementary light source.

In terms of software, the iPhone 3GS comes pre-installed with iPhoneOS 3 and has been upgraded to iOS 6.1.6. The new flat design iOS 7 excludes the iPhone 3GS from the list of supported devices, so iOS 6.1 .6 is also the last iOS version supported in iPhone 3GS history.

As the “endpoint” of quasi-materialization, we look at what iOS 6 offers, and it is indeed a bit embarrassing. You get thins like the classic sliding to unlock sound effects, the rolling shutter animation when opening the camera, etc. 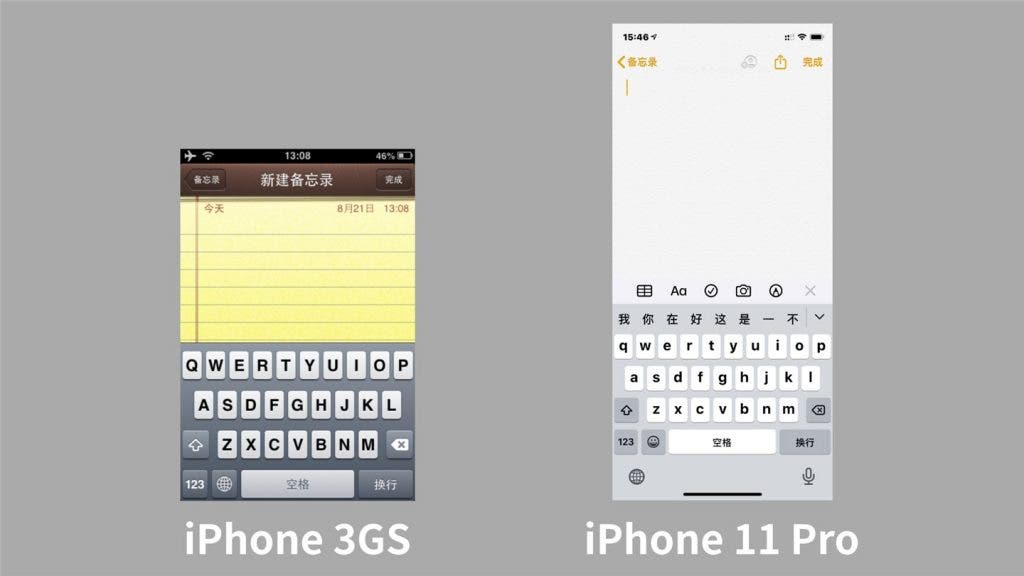 As for the processor, the iPhone 11 Pro comes with a Apple A13 Bionic (7 nm+) processor. However, the iPhone 3GS uses a Samsung APL0298C05 65nm chip. I guess many people do not know that there was ever a 65nm process.

Just as we would expect, there is a significant upgrade over the past 10 years. We see upgrades in almost every aspect. From hardware to software, design to display, there is a significant improvement. Ten years is a mark, a summary of the past, and a vision for the future again. Perhaps ten years later, we will look back at the current iPhone 11 Pro.

Next TikTok's Acquisition: Top 5 reasons why Oracle is no match for Microsoft