Earlier this month, Samsung unveiled a bunch of new products at the Galaxy Unpacked event. The most honorable mention certainly belongs to the Galaxy Note 20 and Note 20 Ultra. However, the company also announced new wearables to keep its grip on this competitive segment. The new Galaxy Watch3 and Buds Live are selling three times more than their predecessors during the first weeks of availability. Both devices went on sale on August 6, and we can already tell that they are a big hit for Samsung.

The Samsung Galaxy Watch3 and Galaxy Buds Live have tripled the sales of their predecessors according to a report from Korean agency Yonhap News. Furthermore, it states that the Mystic Bronze was the color of choice for the buds – half of the people who bought them picked the bronze version. Interestingly enough, this colorway as a hero color for all devices released this month. The Note 20 series, the Watch3, Buds Live, and even the Galaxy Z Fold 2 had a Mystic Bronze colorway. 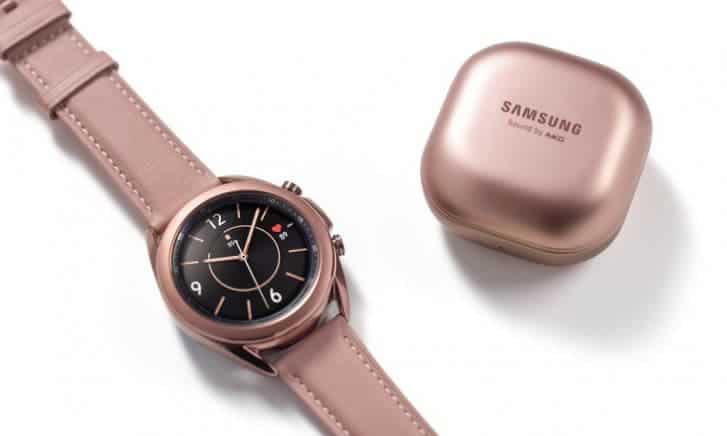 According to the report, the Buds Live crossed the 300,000 sales milestone in just two weeks following the launch. The new smartwatch sold 60,000 units. This is less than the Buds, but it still is three times more what the Galaxy Watch Active 2 achieved early on. The Galaxy Watch3 also broke Samsung’s record for first-day sales by moving 7,000 units. Not bad considering the higher price point of the wearable. For a quick comparison, the Watch Active2 starting price was 300 Euros, while the Watch3 started at 430 Euros.

This makes us wonder what is the biggest reason behind Watch3 success. Perhaps, the new physical rotating bezel accounted for in these numbers. Worth noting that during the first-day sales of the Watch3, the wearable hit 7,000 units sold. The largest number among Samsung’s smartwatch products. The new wearable is available in two models – a 41mm variant with a 1.2-inch display and a 45mm version with a 1.4-inch display.

When it comes to the Live Buds it’s not too hard to guess the reason behind its success. They are the very first Samsung’s TWS earphones to come with ANC (Active Noise Canceling) feature. This has been highly-requested, but Samsung failed to deliver with the Galaxy Buds+. Now, the feature is finally available.

Worth noting that these sale numbers are just comprising the South Korean market. However, both devices should experience a huge demand in other international markets.